A Berlin court has sentenced a man to four years and three months in prison for the deadly assault last October. His victim was pushed onto the tracks after a dispute about drugs shortly before a train arrived. 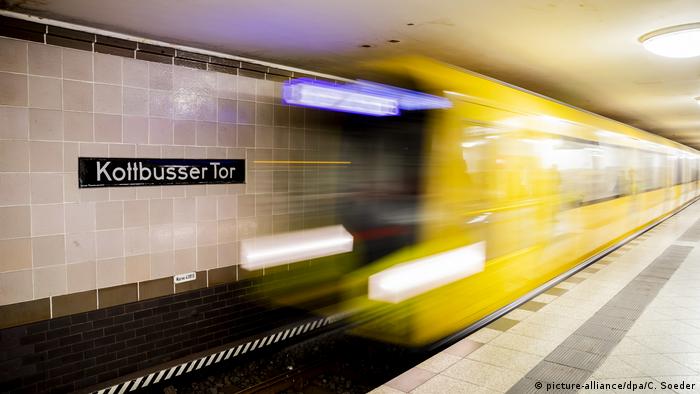 A Berlin court on Friday sentenced a 27-year-old man to four years and three months behind bars for pushing a 30-year-old victim to his death on the tracks of a Berlin underground station last October.

The presiding judge, Thomas Groß, ruled that the suspect – only known as Zakaria L. – had pushed the victim in front of a subway train following a fallout over drugs. However, the court did not recognize any obvious intent to kill.

The public prosecutor's office had initially called for a murder conviction and a life sentence.

Read more: Germany: Boy dies after being pushed in front of train

The court heard that on October 29, 2019, the victim was hit by an oncoming subway train while lying the tracks of the Kottbusser Tor U-Bahn in central Kreuzberg. Moments earlier he had been pushed onto the tracks by L.

The judge was told the conflict had already ended and that the victim had not been aware of any risk to his life at the moment he was pushed.

L. had been drunk shortly before the incident and had possibly taken other drugs as his DNA was found on a beer bottle at the crime scene, according to court testimony.

The accused reportedly fled the scene and was only caught following several days of investigations in the Kreuzberg district's drug scene.

"There is no question: He wanted to hurt him in some way," said Judge Groß about L.'s motive.

'No intent to kill'

The judge, however, emphasized that the Chamber had not been able to establish that L. had noticed the train coming towards the station and therefore did not recognize any intent to kill.

Furthermore, the court could only convict L. of attempted bodily harm as the autopsy was no longer able to determine whether the impact of being pushed onto the tracks had in itself already resulted in an injury to the victim.

The judges were able to use numerous video recordings from the subway station as evidence.

As well as the jail term, the 27-year-old was also sentenced to a stay at a rehab facility.

Immediately after the verdict, the prosecutor's office said it would appeal the case.

The attack, and other similar tragedies, have sparked a nationwide debate over the lack of security at railway stations in Germany.

In July this year, an eight-year-old boy was killed when he was pushed under a train by a man at Frankfurt's main station.

His mother had also been pushed but managed to save herself.

In the same month, another woman was pushed in front of a train in the town of Voerde in North Rhine-Westphalia and died at the scene.

Earlier this year, a 17-year-old was pushed onto tracks by a woman at the Berlin’s central Alexanderplatz station but managed to save herself before a train arrived.

The tragedy in Frankfurt will have serious consequences for an already-tense societal debate in Germany. That's why it's so important that the media report the truth completely, says DW Editor-in-Chief Ines Pohl. (30.07.2019)

A court has ordered a man accused of pushing a woman in front of a train to be put in a closed psychiatric ward indefinitely. The court said he can't be legally responsible for the crime due to mental illness. (28.01.2020)