A little over a year after taking over the leadership of the Left Party, Susanne Hennig-Wellsow is stepping down, citing private reasons and a need for party renewal. She also criticized the party's handling of sexism. 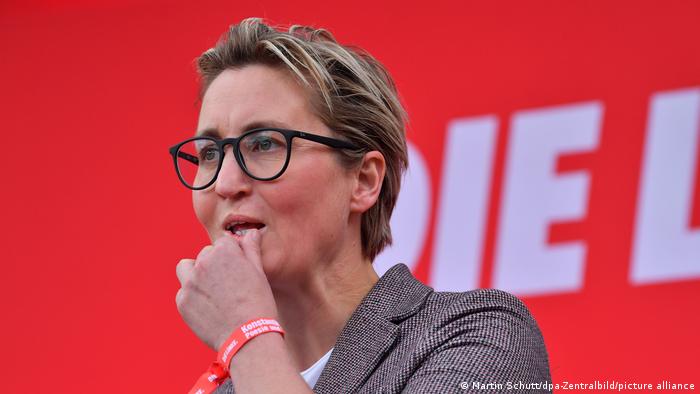 The co-leader of Germany's socialist Left Party, Susanne Hennig-Wellsow, has announced that she is resigning "with immediate effect."

In a statement published online, the 44-year-old politician said there were a number of reasons behind her decision, including the "handling of sexism" in the party's ranks and the need for "new faces" to drive the Left's renewal.

Hennig-Wellsow also cited her young son, saying her "private situation" did not allow her to commit the necessary time and energy to the party.

"The Left also needs a chairwoman who is there for the party, with everything she has," the statement said.

Hennig-Wellsow criticized the Left's handling of sexism accusations, saying it exposed "glaring deficits" in the party.

"I apologize to those affected and support all efforts to make the Left a party in which sexism has no place," she said.

Last week, a report in German news magazine Der Spiegel detailed allegations of sexual violence in the Left Party in the state of Hesse over a number of years. According to the report, the former partner of Janine Wissler, who is Hennig-Wellsow's fellow co-leader, was among those accused. In one alleged instance, a woman said she was filmed having sex when she was underage.

The party's federal executive board is expected to discuss the matter later on Wednesday.

Hennig-Wellsow also lamented the party's poor results in last year's federal election, which saw the Left suffer their worst showing since their official formation in 2007.

"A truly fresh start has failed to materialize," Hennig-Wellsow's statement said. "We were unable to deliver on the promise of being part of a forward-looking policy change because of our own weakness."

"Too few people believed that we were willing and able to actively shape this country for the better," she said.

Hennig-Wellsow led the Left Party alongside Janine Wissler after taking over from former co-leaders Katja Kipping and Bernd Riexinger in February 2021.