German police are looking for two men who attacked a man wearing Jewish clothing while he was walking in Berlin. The number of violent anti-Semitic attacks in Germany increased between 2017 and 2018. 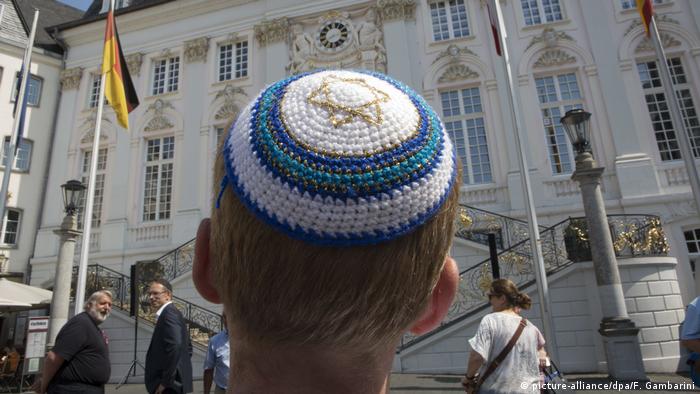 German authorities have launched an investigation after two men attacked a Jewish man who was walking through Berlin on Tuesday night.

Police said on Wednesday that the 55-year old was approached from behind and was struck in the back, as he was walking in the Charlottenburg district of the German capital.

A police statement said the victim was of Jewish faith and was wearing clothes that identified him as Jewish.

The victim went home after the attack but called emergency services after feeling sharp pains in his head and one of his legs.

Police are asking for any information and are searching for the two assailants, who left the man on the ground and fled.

Anti-Semitic attacks on the rise

The number of cases considered to be violent increased from 37 to 62 over the same period.

In July, Orthodox Rabbi Yehuda Teichtal was spat upon as he headed home from a synagogue in Berlin's Charlottenburg district. Earlier this month in Munich, two anti-Semitic attacks were reported within days of each other.

The President of the Conference of European Rabbis, Chief Rabbi Pinchas Goldschmidt, told DW that "every single attack on a member of the Jewish community is also an attack on German society and its values."

"If Germany does not want to be plunged back into the darkest chapter of its history, it will have to proceed with a no-tolerance approach to anti-Semitic and racist acts," Goldschmidt said.

German President Frank-Walter Steinmeier said in March that fighting anti-Semitism is a "civic duty" for all Germans.

"Anti-Semitism is always an attack on all of us, on our democracy and our open society," Steinmeier said.