Upcoming games against Bulgaria and Serbia may be World Cup qualifiers in name, but they're more like warm-ups for next year's Euros. A mini-tournament in February also gives Martina Voss-Tecklenburg extra preparation. 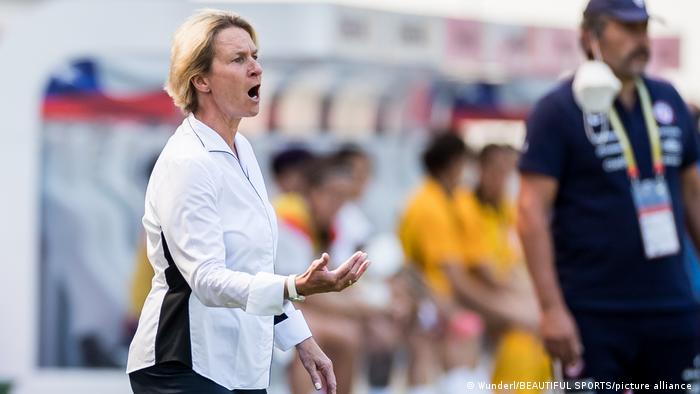 Germany men's coach Hansi Flick must be secretly envious about the time his women's team counterpart gets to spend with her squad.

Compared with the rushed world of men's internatinal football, Martina Voss-Tecklenburg has a massive five days to prepare her team for the first World Cup qualifier in Cottbus against Bulgaria on Saturday.

Three days later, Germany go up against Serbia in Chemnitz. The postponement of the women's Euros by a year to next July means teams are playing World Cup qualifiers almost as warm-úp games for the Euro tournament in England.

"It is a special challenge to play a World Cup qualifier in preparation for a European Championship," said Voss-Tecklenburg.

MVT, as the national coach is known in internal communications, is setting the bar high for her players.

Not only is World Cup qualifying going on, but Germany have also signed up to play in a four-nation mini-tournament in England in February - very much a real warm-up for the Euros.

The German Football Federation (DFB)  wants the extra games against top opposition, including England, Spain and an as yet unannounced fourth side, because the standard of opposition in World Cup qualifying Group H is, on paper, significantly weaker.

Bulgaria, Serbia, Israel, Portugal and Turkey are at best unpleasant opponents. However, they should not represent a major hurdle on Germany's way to the 2023 World Cup in Australia and New Zealand.

The games in the eastern cities of Cottbus and Chemnitz should produce six points for Germany, but that does not mean there will be huge experimentation against weaker sides.

There will be less rotation to give the team a better chance of gelling for the Euros.

"Without being disrespectful, we now have two opponents that we are looking forward to playing... we simply have to beat them," Voss-Tecklenburg added. 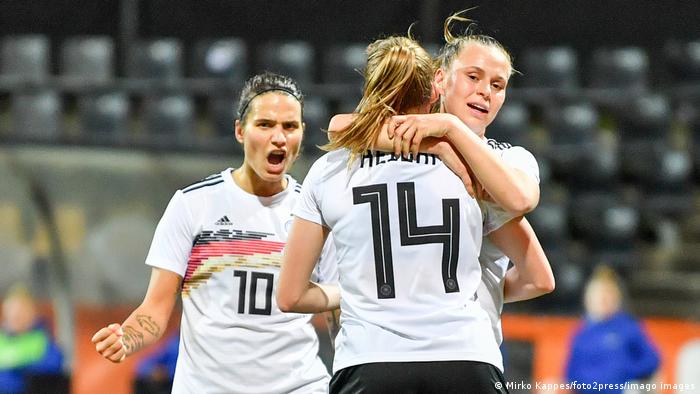 Germany have won three, lost two and drawn one in friendlies this year

After missing out on the Tokyo Olympics, the first two competitive matches of 2021 await Germany's women after six friendlies with mixed results earlier in the year.

Midfielder Dzsenifer Marozsan is keen to get back to competitive action.

"I think it's super. It really means something and you can already see it in training. It's nice to have a goal in mind," she said.

Germany's senior men may have flopped in Euro 2020 for Joachim Löw's final tournament in charge, but the men's under-21 team won their Euros in June under Stefan Kuntz.

Voss-Tecklenburg has already shared ideas with Kuntz about how the women, who last won the title in 2013, can replicate the success.

"It's a never-ending learning process and if that's open and transparent from all sides, it should be the same within the DFB," said MVT, who would like to also chat in detail with Flick.

He will no doubt ask how she enjoys the luxury of having so much preparation time before matches.