Germany get off to perfect start at Ice Hockey World Championship

Cohosts Germany have pulled off a major upset at the IIHF Ice Hockey World Championship. The result has fans wondering whether this could spur them onto faring as well as Germany did the last time they hosted the worlds. 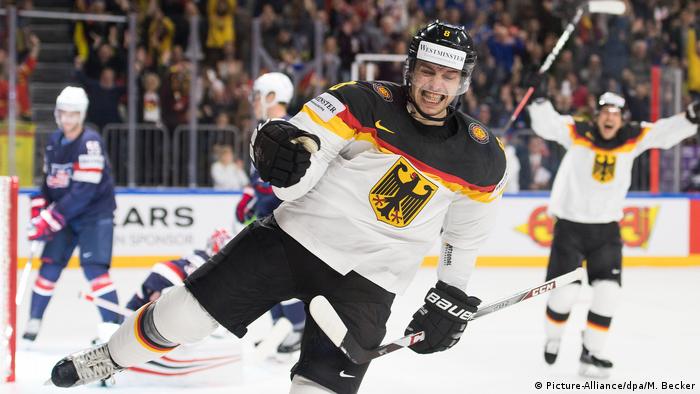 Germany beat the odds at Cologne's Lanxess Arena on Friday night by hanging on to defeat a star-studded American team 2-1 thanks to a hot goalie, determination by the whole team to battle hard from start to finish - and the odd lucky bounce.

However, things didn't start out so well. In fact, Germany suffered a setback even before the opening faceoff. The German hockey association (DEB) announced that the captain, Christian Ehrhoff, was injured and therefore out for the game against the United States - a major blow to a team that would need almost everything to go right to get a result against a very strong team made up mainly of NHL stars. However in the form of Dennis Seidenberg, the only Stanley Cup winner on his team, Sturm had the perfect replacement to turn to – to wear the captain's 'C.'

Almost over before it started

And it was a good thing too, as the US showed they meant business right from the opening faceoff when Johnny Gaudreau took a pass down the middle and found himself on a breakaway. Fortunately for Germany, netminder Thomas Greiss was equal to the task. A couple of minutes later an American shooter rang one off the post.

Fortunately, Germany found their way into the match as the first period wore on, and at 10:50, Tobias Rieder put a rebound past US goalie Jimmy Howard, much to the delight of the more than 18,600 mostly German fans in the arena. 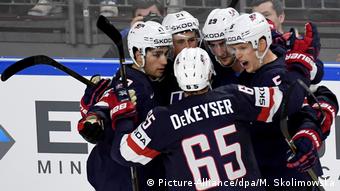 The Americans' joy would be short-lived

However, despite the lead, the very loud home supporters would spend much of the rest of the game biting their fingernails, as the young and skilled Americans repeatedly hemmed Germany into their zone. In fact at times it seemed like just a matter of time until they would score the equalizer, which came at the 11:00-minute mark of the third period. That's when US defenseman Connor Murphy fired a wrist shot from the point that got through traffic and beat Greiss low to the stick side.

The German crowd, though, continued to urge their team on, at times breaking out in chants of "Deutschland, Deutschland," and their team would get the break they needed two-and-a-half minutes later, when the Americans took a penalty. Just 32 seconds  into the powerplay, Germany struck, with Patrick Hager deflecting a Seidenberg shot from the point past Howard, for what would stand up for the final six minutes as the winning goal.

This was the same 2-1 final score that Germany beat the United States by in the first game of the 2010 world championship, which is the last time the tournament was played here. This begged the question as to whether this was a good omen for this year.

"No, the one thing has nothing to do with the other," veteran defenseman Moritz Müller insisted afterwards. "We are pleased that we have won our first game again. Now we will savor this for a short time, but we know that the next unbelievably strong opponent is waiting for us tomorrow and we have to be just as well prepared as today and work just as hard. So we aren't looking too far into the future. It's all step by step." 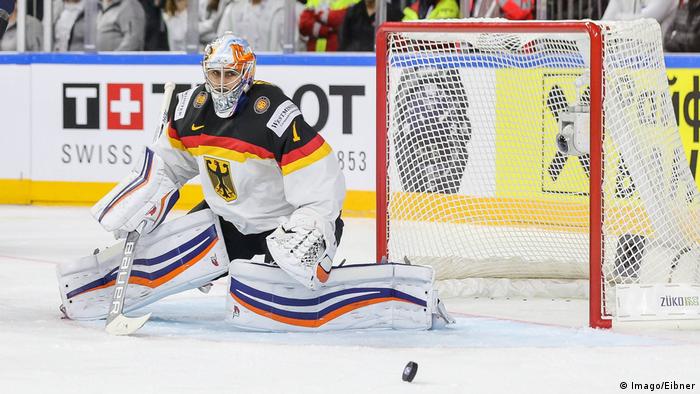 Thomas Greiss was stellar between the pipes for Germany, stopping all but one of the 43 shots the Americans fired his way

However, whether the German players or their coaching staff like it or not, in the lead up to this world championship, this is precisely what the fans and the media were talking about. The question is: After a perfect start to this tournament, can Germany build on this result, creating a similar euphoria among the fans that the German team under then-coach Uwe Krupp rode all the way to the semifinals in 2010?

Like Müller, coach Sturm is having nothing of this speculation, and warned that Sweden would be even more difficult to beat than the Americans.

"The Swedes have almost all of their best players here," he said. "They are good skaters and tactically smart. They move differently than the Americans. So we will look at all of this and try to come up with the right game plan for tomorrow."

Renewed passion to play for Germany

Whatever the game plan turns out to be, what is clear, is that after the dark few years that followed the 2010 worlds, these players are really passionate to play for Germany again - something that Müller alluded to when asked how they had managed to remotivate themselves after the US got the equalizer.

"In the last two years this has been a team that has had so much passion and so much will. We have experienced really great things in the last little while and maybe that was what inspired us to say 'why not, why can’t we turn it around again?' We simply never give up"

The last two years that Müller referred to just happen to coincide with the timeframe since Marco Sturm took over as the national team's coach.

Germany needed to beat Latvia to ensure qualification for the Winter Olympics in 2018. Tom Kühnhackl of the Stanley Cup champions, the Pittsburgh Penguins, scored a late winner to seal a 3-2 win. (04.09.2016)