Germany floods: The challenge of waste disposal | Germany | News and in-depth reporting from Berlin and beyond | DW | 28.07.2021

Thousands of tons of refuse are being cleared from Germany's flood-hit regions. Removing unprecedented mountains of belongings is a challenge, but it is also helping residents begin to move forward. 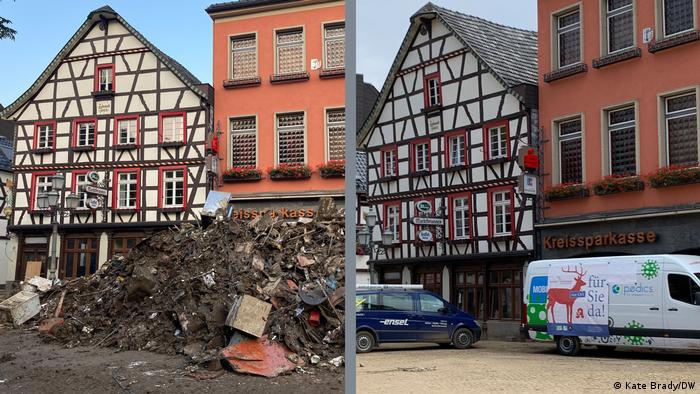 Ahrweiler before and after the clean-up operation

After the water subsided from the devastating floods of mid-July, household waste, furniture and electrical appliances lined the streets of the town of Ahrweiler like barricades as residents cleared out their flooded homes. Fridges filled with yesterday's grocery shopping, washing machines and sofas piled up, along with books, photo albums and records, all coated in a thick layer of oily mud.

Almost two weeks later, and the streets are largely clear of debris, the buildings slowly becoming more recognizable as their quaint former selves.

Authorities sought to quickly remove bulky waste from the streets due to growing hygiene concerns and because it was obstructing vital traffic. For some residents, however, waste removal is also part of coming to terms with the catastrophe.

"It's a huge relief that the garbage has been moved," says one resident, Ms. Kroll (who did not wish to give her full name, Eds.). Just a week ago, a fridge stood in front of her parents' house, alphabet magnets still attached. Scrawled on the door were the words: "Thank God we're alive. "

"You don't walk by every day anymore and see what you've lost. There's a sense of closure that comes with that," Kroll says. "You're not constantly looking and thinking, 'Maybe there's still something there I could save.'"

Though the streets are largely clear, much of the bulky waste is yet to reach a recycling facility. Instead, it's been moved to decentralized locations on the edge of town.

One of the biggest challenges is finding space for the unprecedented amounts of refuse. 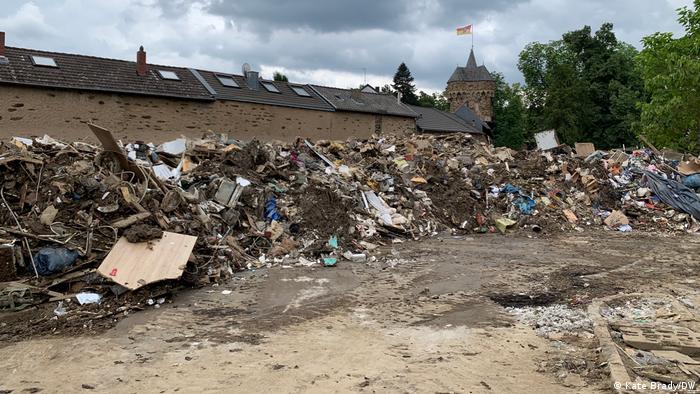 An interim solution: Refuse has been piled up alongside the road leading out of Ahrweiler

The association Environmental Action Germany (DUH) has warned that the mounds of homeware should be stored on solid surfaces, such as concrete, to prevent pollutants from seeping into the groundwater. It says this will limit the environmental impact of the excess waste.

Marieke Hoffmann, DUH project leader for recycling management, says the large amounts of refuse in flooded areas create problems for the environment not only directly in terms of waste disposal, but also because of the pollution caused by the procurement of new products.

"To protect our natural resources as much as possible, undamaged items such as metal furniture, bicycles or dishes should be cleaned, repaired if necessary and reused." 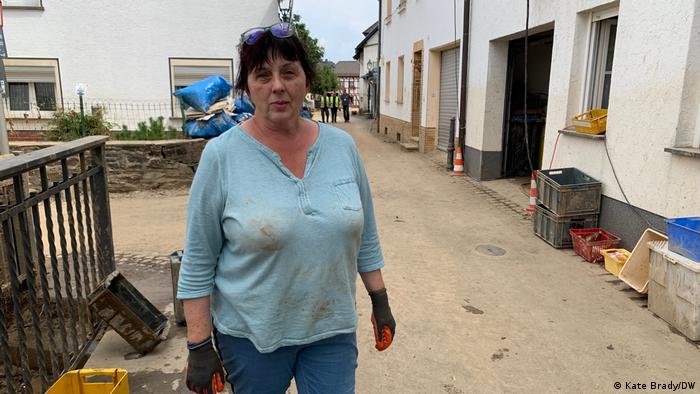 Like much of the recovery in the flood-hit regions, waste removal has been a joint effort. Local building contractors, farmers and the fire brigade have joined forces with waste management companies, which are being stretched to their limits.

Some companies like RSAG, a waste management company in the Rhein-Sieg area, had to deal with their own problems caused by the flooding.

"Initially, we couldn't pick up any waste. Our collection vehicles were stuck in the water, and the storage facilities were underwater too," says RSAG public affairs officer Christof Gerharz. 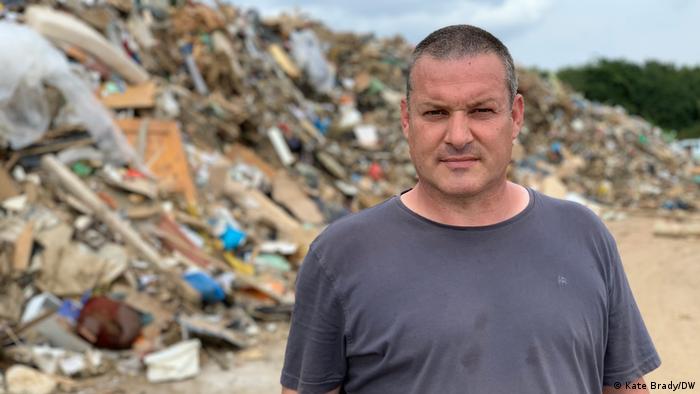 Collection trucks are back in action, picking up thousands of tons of waste. Extra personnel has also been called in to work weekends.

But there is no end in sight. RSAG is expecting a second wave as people throw out the more bulky waste. "Some people in these affected areas are only now returning from their vacation to sort out their homes. On top of that, you have this huge, decentralized location. We really can't say how long it will take."

Ralf Schäfer is currently repurposing his compost facility in nearby Müttinghoven to help ease the strain on other facilities.

The stench from the mud-soaked waste hangs in the air. "Usually the smell of the compost isn't a problem. But this stuff from the floods you can smell way beyond the facility," says Schäfer.

"But where else is it going to go?" he asks. In front of the mountain range of refuse, a tiny green machine, the "Terminator," gets to work on making waste more compact before it's sent to an incinerator. 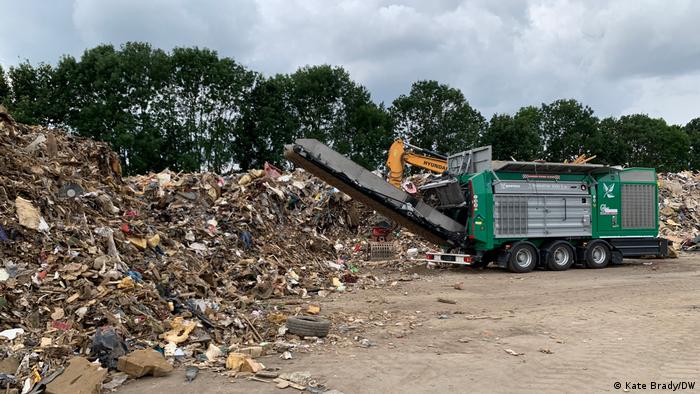 Under normal circumstances, the bulky waste would also be separated. "But a lot of what we've been receiving in the last week has been damaged to such an extent that it's just made smaller and put in the incinerator," says Andre Lotz, chief executive of waste and recycling service AVG Cologne.

"We take out the iron, of course, and wood that's still worth saving. But the problem is that so much of the wood from the flood-hit areas is just too wet. "

In the meantime, some of the waste is being transferred to sites to dry before being incinerated. Lotz expects the entire waste disposal process to last for months.

"The facilities that already exist obviously weren't made with this kind of catastrophe in mind. We just can't plan at the moment for how much more is coming. "

While most volunteers have been welcome to help transport waste and debris, local police in the flooded areas also have their eye on people who say they've come to lend a helping hand but are really just looking to make money from bulky waste.

"We've had to file 10 criminal charges for theft of metal and electrical appliances from waste piles, for example, but also of a washing machine or tools that were stood out to dry," says police superintendent Marcel Dilling in the Märkischer Kreis area. Few of the scrap collectors could provide a permit for waste collection, he adds.

Since police presence was stepped up, the number of vehicles illegally collecting bulky waste in the areas seems to have reduced, says Dilling.

Well-intentioned helpers, however, have been overwhelmed by the gratitude from residents in the affected areas — some of whom have hoisted banners on makeshift flagpoles, thanking volunteers and rescue services.

"When the first big mountain of waste was gone, it felt like Christmas," says Ahrweiler resident Carmen Peitz-von-der-Eichen.

She and her partner are already preparing for the next challenge. "We've started searching through bags of things we've tried to save. When it comes to rebuilding, there'll likely be a shortage of tools," she says.

"We'll need every hammer and every saw."

Germany floods: Politicians and the balancing act amid crisis

As Germany reels from catastrophic floods, experts doubt there will be a lasting effect on the upcoming national election. But candidates will have to walk a fine line between showing empathy and exploiting tragedy.