Homicide police are investigating a weekend shooting at a German funfair. After repeated altercations between a group of youths and a teenager and his father, an apparent bystander was shot by a stray bullet. 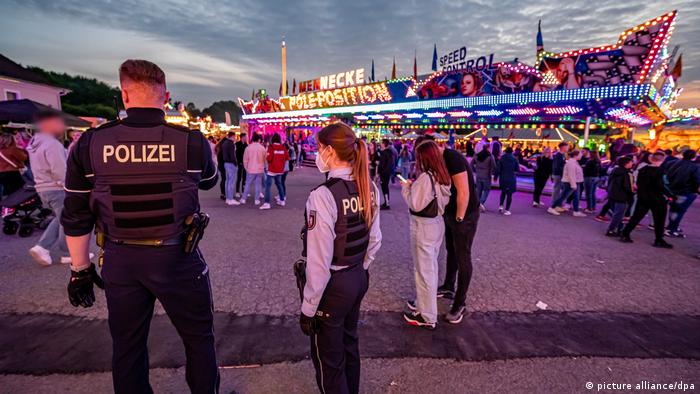 A 40-year-old was shot and killed at a funfair in Lüdenscheid, east of Cologne, police said on Sunday. The incident took place the preceding evening.

The local homicide commission and criminal police force had taken over the investigation and were seeking more information from witnesses.

Trouble first arose when a group of six young men, thought to be aged between 16 and 20, were involved in what police described as a "physical confrontation" with a 16-year-old.

Around 20 minutes later, the 16-year-old returned with his father to confront the group again.

The six youths, who police described as having a "southern appearance," a term often used by German authorities to describe people of north African or middle eastern appearance, tried to flee but were pursued.

As they ran, police believe that two of the youths fired shots, one using a warning and signal weapon and another using a real gun.

"The shots were both fired into the air, and in the direction of the pursuing 16-year-old and his 52-year-old father," police said. "A 40-year-old man from Gummersbach, who was also situated near the exit of the funfair, was hit by a projectile. He later died of his injuries in hospital."

Police said it was unclear whether the victim, who had taken no visible part in the fracas, had any connection to either group.

Police offered only limited information on the young men's appearance, saying all looked southern, aged roughly 16 to 20, with four wearing dark clothing, one wearing a gray tracksuit and one wearing a white t-shirt.

Germany: One person injured in a shooting incident at a high school

An armed suspect has been detained after one person was seriously injured in a shooting at a high school in the northern city of Bremerhaven, police said.

A 38-year-old man has been charged with the German equivalent of first-degree murder for shooting dead two young police officers. The incident happened in January near the town of Kusel.

Two police officers were shot dead earlier on Monday during a traffic stop. Federal Interior Minister Nancy Faeser described the killings as tantamount to an execution.