Germany took a surprise 1-0 lead in their quarterfinal against Russia in Moscow but the hosts fought back to secure a comfortable 4-1 success and a berth in the last four against Finland. 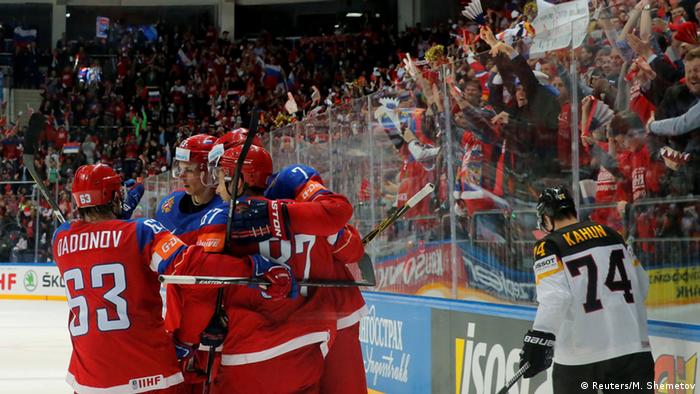 Germany's hopes of securing a berth in the last four of the world ice-hockey championship were dashed by a 4-1 defeat to hosts Russia in the quarterfinals on Thursday.

Germany opened a surprise 1-0 lead after the first period of the match in Moscow thanks to Patrick Reimer's fifth-minute effort.

But not even in-form goalie Thomas Greiss could keep the “red machine” at bay and Russia go through to face Finland after the 2011 winners thumped Denmark 5-1.

The United States edged the Czech Republic 2-1 after a shootout and will play reigning champions Canada, who hammered Sweden 6-0, in the other of Saturday's semi-finals.

Germany were hoping to reach the last four for the first time since 2010 but will expect their run to the quarterfinals to lift them for their Olympic qualification bid in September.

After an impressive tournament so far, Germany will face hosts Russia in the quarterfinals of the world ice hockey championship. Despite their form, Germany will go into the match as clear underdogs. (17.05.2016)

Last-minute goal sends Germany past US

Germany have taken a huge step toward quarterfinal qualification with a 3-2 win over the United States. The deciding goal came just before the final buzzer in one of the thrillers of the tournament thus far. (15.05.2016)

Germany give Canada a real game

Title holders Canada needed everything they had to earn a 5-2 victory of Germany at the Ice Hockey World Championships. The game was level for two periods, but the Canadians were ultimately too good. (12.05.2016)