A senior Libyan diplomat's allegiance to Moammar Gadhafi has led Germany to order him and his family to leave the country. The Foreign Office confirmed a report first published in a German newsmagazine. 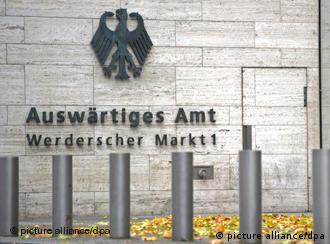 Germany has expelled a senior Libyan diplomat due to his allegiance to Libyan strongman Moammar Gadhafi.

A spokeswoman for the German foreign ministry on Sunday confirmed an article in the newsmagazine Focus that reported Berlin had declared the diplomat a "persona non grata" and ordered him and his family to leave the country.

She said the ministry made the decision after consultations with security officials, but declined to detail what had led to the decision.

The magazine report identified the diplomat in question as Hisham al-Sharif, who it said had been appointed by Gadhafi's government as the Berlin embassy's charge d'affaires on July 22.

The diplomat's lawyer objected to his expulsion, arguing that it would force him and his family to return to a country wracked by civil war, the report said.

The move follows the expulsion of nine of Gadhafi's diplomats by the British government last Wednesday.

The UK then asked Libyan rebels to send their own representatives to London.

Britain has invited Libya's National Transitional Council to replace diplomats loyal to dictator Moammar Gadhafi. This comes as the rebels said an offer for Gadhafi to stay in Libya if he stepped down has expired. (27.07.2011)

At their conference in Istanbul, Western nations have thrown their full support behind Libya's rebels, recognizing them as the 'government authority.' In a major policy shift Turkey has cut ties with Tripoli. (15.07.2011)