A study of baby names in Germany has revealed that the most popular last year were Emilia for girls and Noah for boys. In compiling the list, researchers also noticed something of a trend with girls' names. 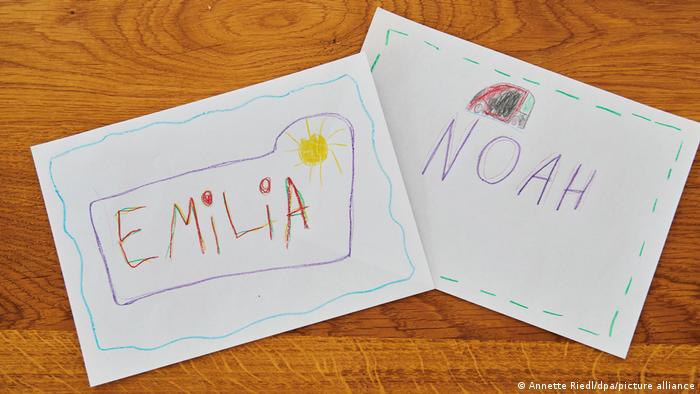 The name Noah kept the top spot for boys, while Emilia was up three places from the previous year

The most popular first names for babies in Germany last year were Emilia and Noah, the Society for the German Language (GfdS) announced on Monday.

Emilia moved from fourth place in 2019 to first place in 2020, while Noah retained the top spot it held in the previous year.

Little movement, only one surprise

Hanna(h) and Emma were in second and third place respectively for girls, with Leon and Paul taking those spots when it came to boys' names.

The previous year, Hanna(h) and Emma had topped the list, with Mia in third place. For boys, Ben and Paul were in second and third place.

There was little movement for most of the names. The only real surprise was the name Mat(h)eo or Matt(h)eo, which caused a small surprise by shooting up from 13th place in the previous year to fourth place.

The name was far more popular in eastern Germany, topping the list there while coming only in sixth place in the western states.

According to the GfdS, a trend toward "phonetic monotony" continued in 2020, particularly in the list of the top 10 girls' names. All of them now end in -a or -ah and have similar timbres — such as Lina, Mila or Ella.

The group of the 10 most popular boys' names was "more dynamic and phonetically more disparate" overall, according to the language experts. These included Elias, Henry/Henri, Felix and Louis.

Data from the registry offices also show that only about 35%, or just over a third, of all children were given more than one name last year. Among girls, Sophie, Marie and Maria were particularly frequent second or subsequent names, as in previous years. Among boys, there was a high prevalence of the names Alexander, Maximilian and Elias.

The GfdS said this reflected a trend toward assigning second or subsequent names less frequently in honor of family forebears.