State and local authorities should stay in charge of responding to natural disasters, according to the interior minister. His remarks come after Germany's recent deadly floods were followed by more heavy storms. 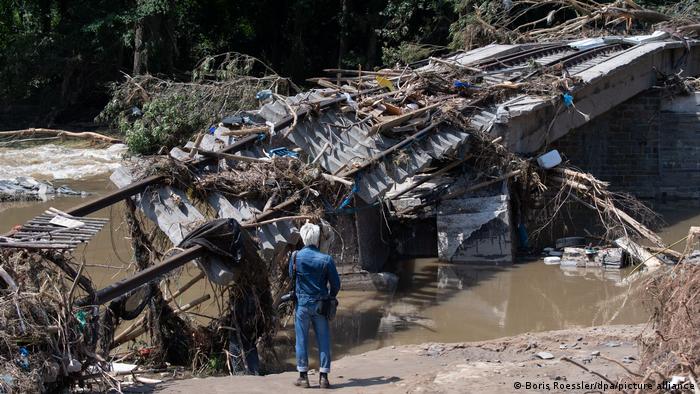 The emergency response to natural disasters should remain in the hands of the states and local authorities and should not be taken over by the German federal government, Interior Minister Horst Seehofer said on Monday.

Seehofer's remarks at a special session of the parliamentary internal affairs committee come as German authorities investigate the effectiveness of the overall response to the deadly floods in mid-July. At least 179 people died in the disaster, and dozens are still missing.

The comments suggest that the existing system in Germany will be retained, under which individual states are largely tasked with dealing with natural disasters while the national government is responsible for the country's defense.

Since the floods, several politicians have been calling for the federal government to step up its role in disaster management.

What else did Seehofer say?

Seehofer said that although federal intervention was the wrong path to take, the federal office for emergency protection, the BBK, should have an increased role in coordinating the response. This had been agreed by the 16 state interior ministers even before the flooding, he said.

He also said that the federal government should continue to make its resources available to the states by way of support. This already happens, he said, through the deployment of Germany's agency for technical relief (THW) and federal police.

However, Seehofer called for improvements in the country's system for alerting its citizens to danger, proposing a mixture of warning apps, cellphone broadcasts and sirens.

"The warning app is no use if you're asleep at night and don't hear it — sirens aren't any use either on their own because they don't tell people what they should do," he said.

He said that there was "no reasonable argument" against issuing alarms to cellphones by SMS, although he admitted that there had in the past been resistance at federal level to doing so.

Following the floods, there have been many claims that weather warnings issued by national weather services failed to reach those at risk of flooding.

Seehofer is a member of the conservative Christian Social Union, the Bavarian sister party to Chancellor Angela Merkel's Christian Democrats.

Strong storms and heavy rainfall occurred in Berlin, Saxony, Brandenburg, Schleswig-Holstein and Upper Bavaria, with the western regions that were so badly hit in mid-July being spared further devastation.

One of the reported victims was a 67-year-old man in the Saxon town of Weisswasser who was electrocuted in his garden shed while trying to pump it free of water. The other was a 57-year-old huntsman in Eglfing in Upper Bavaria who died when his raised hide was blown over by strong winds.

Numerous basements and streets were also flooded in the affected regions.