Since Germany moved into the crosshairs of Islamist terrorists, a number of threats have been made against the country's infrastructure and people. The latest has been investigated and revealed as less than credible. 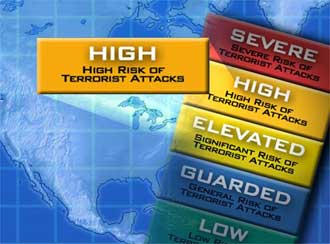 Unlike the US, Germany is not at high risk, government officials say

After receiving a threat of a possible attack against the Federal Justice Ministry last week, German security officials have scaled down their terror warning. Interior Ministry spokesperson Stefan Kaller announced during a press conference in Berlin on Monday, Jan. 14, that there was a "lower degree of seriousness" in terms of likely terror attacks on German soil.

The German press reported over the weekend that al Qaeda sympathizers were allegedly planning terrorist attacks in Germany following the recent arrest of a number of suspected Islamist terrorists.

Lebanese security officials had reportedly warned German authorities of possible revenge terror acts by a group affiliated to al Qaeda on various sites, among them the German Justice Ministry, military facilities and other government buildings.

The tip-off came after Mohammed Ndoub, a Syrian national, was arrested by Lebanese authorities after issuing the threats to the German embassy in Beirut via a public telephone.

According to Ndoub, a truck carrying one ton of explosives was said to be on its way to the north German port city of Rostock via Russia and Finland.

Ndoub allegedly told the embassy that the attacks would be "to avenge" the recent conviction in Beirut of one of the attempted German passenger train bombers and the on-going trial in Germany of the other.

Jihad Hamad was sentenced in Lebanon last month to 12 years imprisonment for his role in the failed July 31, 2006, bombings, while Youssef al-Haj Dib is currently still on trial in Germany. Both are accused of conspiring to blow up busy commuter trains near Hamm and Koblenz with home-made gas canister bombs hidden in luggage. The bombs failed to detonate owing to technical faults.

BKA rules out an attack after receiving information

"An attack can be ruled out on the basis of the information we have at our disposal," Clemens said in a statement from the BKA headquarters in Wiesbaden. She did not provide any further details.

Reports carried by a number of news agencies suggest that a Lebanese security official had confirmed that further interrogations of suspects had revealed that the threat was less serious than initially thought.

Ndoub remains in custody in Beirut under suspicion of involvement in local criminal activity.

In an audio message released Thursday, Nov. 30, a voice thought to belong to al Qaeda chief Osama bin Laden called on Europeans to pull out of Afghanistan, where they are standing in the shadow of the White House." (30.11.2007)

Do you worry about terror attacks in your country? Send us an e-mail. Please include your name and country in your reply.