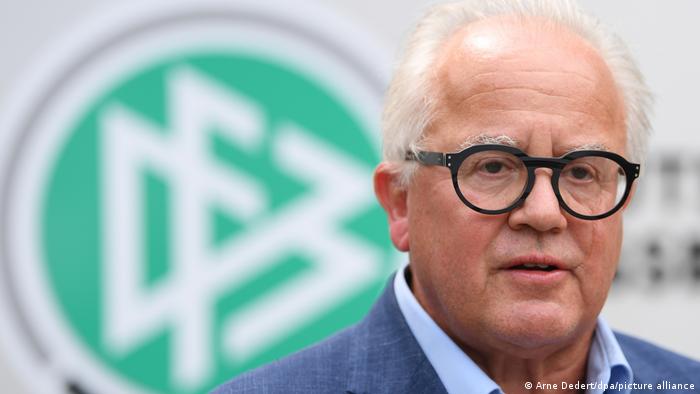 Keller had previously ruled out resigning as head of the DFB

The embattled chief of the German Football Association (DFB) has offered to give up his post, the association said in a statement on Tuesday.

"President Fritz Keller in a decision he took himself has declared his principal readiness to step down from his position as president after the end of the process at the DFB sports court on Monday, May 17," the statement read.

Keller apologized for the remark, which was made during a federation meeting on April 23.

His comment prompted the DFB's regional and state officials to express a vote of no confidence in Keller — but he still refused to resign at the time.

He is due to appear before a sports tribunal next week over the case, after which point he plans to offer to step down.

The DFB is the world's biggest single sports federation with more than seven million registered members; Germany will host the 2024 European championship.

Keller is the fourth consecutive president to be tarnished by scandal with his predecessor Reinhard Grindel having been forced to resign in 2019 after accepting a luxury watch as a gift from a Ukrainian businessman.

Grindel's own predecessors -- Wolfgang Niersbach and Theo Zwanziger -- were investigated and indicted in Switzerland over a payment for the 2006 World Cup in Germany.

Keller isn't the only departure in the DFB's leadership.

The association's General Secretary Friedrich Curtius will also be leaving his post, the DFB said.

Vice president Koch and fellow vice president Peter Peters will remain in their posts to act as interim presidents until early 2022 when the DFB holds its general meeting.

Afterwards, Koch will not run for his position again.

Who was Roland Freisler?

Freisler, a participant in the Wannsee Conference of 1942, was one of the Nazis responsible for the organization of the Holocaust.

He became president of the People's Court, where he issued around 2,600 death sentences to opponents of the Nazi regime.