A suspected "Islamic State" member has been deported from Germany to Tunisia despite concerns that he will be tortured. His lawyer says it is a scandal that he was not tried in Germany. 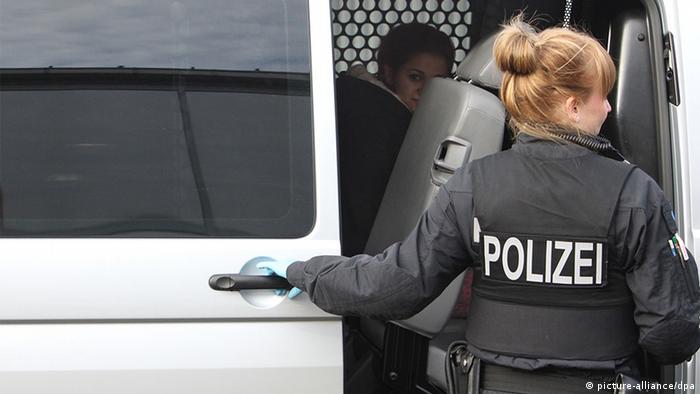 Germany has been accused of allowing Tunisia to "do its dirty work" after deporting Tunisian Charfeddine T., alias Ashraf Al-T., despite concerns he would be jailed and tortured on arrival.

The 24-year-old, deported on Wednesday morning, was arrested in Berlin last November, when federal state prosecutors first said he was an IS member.

"Current investigations suggest the suspect had contact with an IS member in Syria who was responsible for operations abroad," a prosecutor's statement read. "From there he is thought to have had permission to plan an attack on people in Germany."

At the time, German media reports followed police statements in presenting the case as the successful prevention of a terrorist attack. Interior Minister Thomas de Maiziere expressed relief at the arrest. "I am very glad that it has been possible to arrest this suspect," he told reporters, before praising security forces for "doing everything to prevent an attack in Germany."

But when the suspect was flown to the Federal Court of Justice in Karlsruhe, the court found that police did not have enough evidence to support the accusations either of his IS membership or that he was planning an attack.

Instead of releasing him, however, the police then took Charfeddine T. to a district court, and had him re-arrested on a charge of falsifying documents, since he had been travelling with a forged Syrian passport.

He then spent five weeks in investigative custody, when, in mid-December, federal prosecutors issued another arrest warrant, repeating the accusations of IS membership and contact with an IS member in Syria, but adding that it could not yet be ascertained whether an attack was being planned.

According to the suspect's lawyer Jonathan Burmeister, the claims were based on information from the FBI and the German domestic intelligence agency, the Verfassungsschutz. This time the federal court agreed, and the suspect was once again transferred into pre-trial detention.

But instead of being tried, the German authorities have now simply deported him to Tunisia, following a number of failed last-minute appeals by Burmeister. "The Tunisian authorities also said that the suspect belonged to Islamist circles, which is why we believe he will be sent directly to prison and can expect to be tortured, because that often happens in Tunisia when there is suspicion of Islamism," he told DW.

This appraisal was borne out by Wenzel Michalski, director of Human Rights Watch (HRW) in Germany. Though he admitted that Tunisia is the most democratic country in North Africa, there have been many reports of torture in the country, and German deportation laws obligate authorities to check whether someone will be subject to inhuman treatment in the country he is being deported to.

Amnesty International's most recent report on Tunisia says suspects in pre-trial detention have been subjected to "beatings, sexual assault and prolonged solitary confinement," as well as the "roast chicken" method of torture: "rotating them on a pole inserted between their handcuffed wrists and feet."

"From the German point-of-view it is clear you can't deport anyone if this person is in danger of being executed or tortured, or even of not getting a fair trial," Michalski told DW. "If that is the case, the person should be tried here. It's as simple as that."

Burmeister said he does not believe his client was planning an attack in Germany, but "that is what the trial that didn't happen would have been there for," he said. "Instead, they just decide he's under suspicion of having committed a crime and then deport him to let others do the dirty work. I think that's a scandal. The accused has a right to have the matter cleared up in court - either he would have been put in prison or he would've been let go."