Some say the German mining industry is squandering too much money and that production should cease as soon as possible, whereas others argue that coal is the energy source of the future. 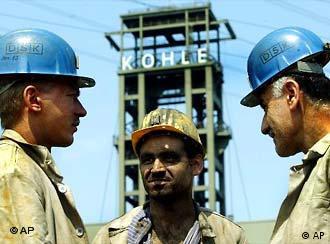 Thousands of miners at risk of unemployment

German hard coal stopped making money a long time ago. Whereas the price for a metric ton of coal on the world market is 60 euros ($78) the cost of extracting one ton in Germany is 165 euros. The German hard-coal mining industry would not survive without subsidies worth billions of euros. The political pressure to shut down the mines is growing.

Yet, Germany's Federal Institute for Geosciences and Natural Resources recently reported that in 25 years coal will be the most important energy source worldwide, stating that by 2030 the oil extraction peak would have been reached and the availability of natural gases would be more limited than is often assumed.

These two conflicting points have been hotly debated in Germany, particularly as the federal government prepared this week for an end of December meeting between politicians and industry representatives to find common ground on coal. The pressing question is whether the German mining industry has a future and, if it does, at what cost. 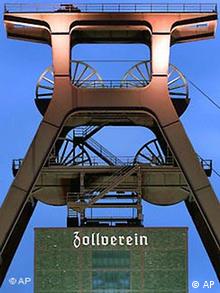 Seven of Germany's eight functioning mines are located in the western state of North Rhine-Westphalia, which is led by a coalition of the Christian Democrats (CDU) and the Social Democrats (SPD). The free-market liberal Free Democratic Party (FDP), which has a small percentage of seats in the parliament, wants to reform the costly mining industry as soon as possible. The state's mines receive 2.5 billion euros per year from the federal and state budgets.

The mining industry guzzles 10 million euros per day, according to calculations by the DIW economics research institute. That amount would suffice to finance one of Germany's Fraunhofer institutes -- where research into new technologies is conducted -- for an entire year, the DIW said.

Many of North Rhine-Westphalia's politicians believe hard coal mining should be reduced or even stopped. They claim that the faster the mines are shut, the more money there will be for the promotion of new technologies.

However, the trade unions are not convinced. "I think it is a completely false, short-sighted decision," said Christoph Meer, a spokesman for Germany's Mining, Chemical and Energy Industrial Union (IGBCE).

The IGBCE is pushing for mining output to be kept constant in at least two or three mines, maintaining an extraction capacity of up to 10 million tons a year. The union also argues that this is necessary for ensuring there are enough energy supplies for the nation.

"The most important reason is security of supply and, above all, the possibility to access German pits," says Christoph Meer "If we give up the pits for good it will be at least a decade until the coal can be got at again. That's surely not how to combat the energy crisis."

There are enough coal reserves worldwide to last 140 years -- much longer than natural oil and gas reserves.

From economic miracle to unemployment 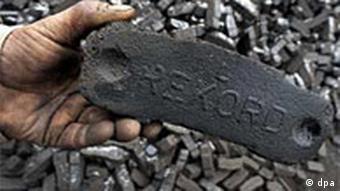 Since then, the coal mining industry has been constantly downsized by political measures. Survival has been possible only thanks to massive subsidies.

Under current socio-political conditions, the reduction of mine production would not be possible until 2018, at the very earliest, without cutting jobs. The German Steinkohle (DSK) mining company still employs 35,000 miners.

However, other companies also make their living from the mining industry, such as truckers or producers of mining equipment. Closing down the mines would thus entail the loss of 80,000 jobs. German producers of mining machinery employ at least 17,000 people, whose expertise and products are in great demand on a global scale.

The total turnover of these 120 mainly small and medium-sized enterprises has risen from 1.5 to 2.3 billion euros since 2000. They would have to move their business abroad if German mines were to be totally shut down. If coal as an energy source does have a flourishing future ahead of it from a global perspective, it might not make sense for Germany's politicians to allow that to happen. 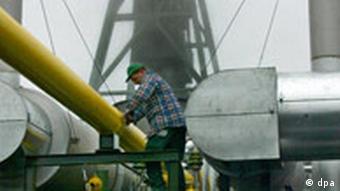 Closing down the mines will damage producers of mining equipment, too

Professor Franz-Josef Wodopia, the head of the German Mining Association, said Germany has already lost ground in international terms. "Let's think back a while to our expertise in coal liquefaction and coal gasification -- now the South African firm Gasol is the know-how expert," he says. "Gasol is already looking at Germany and other countries for ways of exploiting its technology there."

Coke extraction is another area where Germany may have lost out.

"We've seen that the price of coke has exploded and is now at $400 (300 euros) a ton. We could also produce it in Germany at those prices," said Meer.

Commission Cracks Down on EU Carbon Credit Give Away

On Wednesday, the European commission demanded from some EU counties, including Germany, to cut carbon credit permits for 2008-2012, under its European Trading Scheme (ETS), after over-supplying emission rights. (29.11.2006)

As German farmers face an uncertain future, some are turning to alternative crops to keep their land. Meet an innovative farmer who has turned his farm into a million dollar renewable power station. (16.11.2006)