Germany's government has said it confiscated firearms from hundreds of members of the Reichsbürger scene. Authorities have identified some 2,000 more people who identify with Germany's most idiosyncratic far-right group. 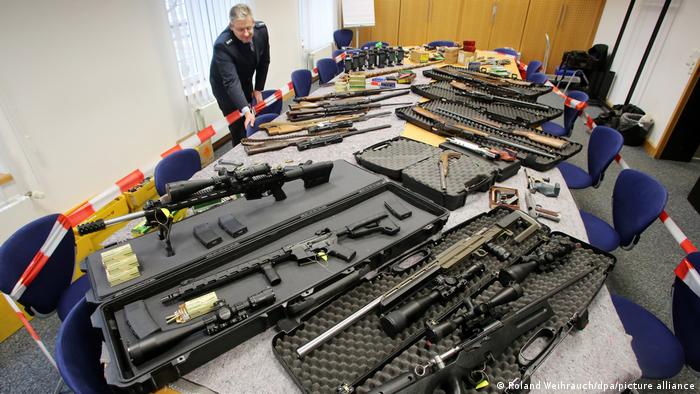 The head of Germany's domestic security agency on Saturday hailed efforts to disarm members of the far-right Reichsbürger scene and other groups who reject the German state, but warned the group's threat level still remains critically high.

Hans-Georg Maassen, the president of the Federal Office for the Protection of the Constitution (BfV), Germany's domestic intelligence service, told the DPA news agency that the latest police crackdowns had seen the number of Reichsbürger with a firearms permit fall below the 1,000 mark.

A BfV spokesman confirmed the figures and Maassen's comments to DW.

"Successes are becoming apparent when it comes to revoking permits," Maassen said. "Nevertheless, we must keep a close eye on this movement."

The radical Reichsbürger movement ("Citizens of the Reich") subscribes to the idea that the 1937 borders of the German Empire still exist and that the modern-day Federal Republic is effectively a puppet state still occupied by the Allied powers.

Members refuse to recognize the German Basic Law, the government, police authorities and the courts, while some are also anti-Semitic.

According to the latest BfV estimates, 920 members of the far-right scene still own firearms, around 700 fewer than last year. However, that latest numbers show that up to 7 percent of suspected Reichsbürger still have a permit to own sporting or hunting rifles — far higher than the national average of 2 percent.

Reichsbürger numbers on the up

Despite the crackdown on armed members, official figures show the total number of Reichsbürger continues to rise, with authorities having identified around 18,400, suspected members, some 900 of whom are believed to be radical right-wing extremists.

However, Maassen stressed that the uptick in numbers also accounted for the authorities' efforts in identifying previously unknown members. "The rise in numbers in the past three months shows that our increased focus on the Reichsbürger scene is paying off," he said.

German security services have increased their monitoring of the far-right scene over the past two years following a spate of violent attacks on the public and police.

The movement gained significant traction after a member shot dead a policeman in Bavaria in October 2016.

A few months later, a member in the southwestern city of Trier shot a soft-air rifle in a public square and threatened several passers-by. Since then, several officers have been injured in police operations against members. The most recently, last month, saw several Reichsbürger clash with police after a protest in Erlenbach in the state of Baden-Württemberg, turned violent.

Several public sector workers across Germany have also been identified as members of the far-right group.

German media have reported that the anti-government group has grown by 56 percent to 15,600 members. Security services are concerned that propaganda about a 'Reichsbürger army' will inspire attacks. (12.01.2018)

The Reichsbürger scene could be much larger than first thought, according to German intelligence officials. Some 15,000 identify with the self-governing movement, around 1,000 of whom have a license to possess firearms. (12.10.2017)