Germany's leaders are expected to extend an ongoing lockdown, as current restrictions are set to expire at the end of the month. The meeting will take place just hours after a new strain was identified in Bavaria. 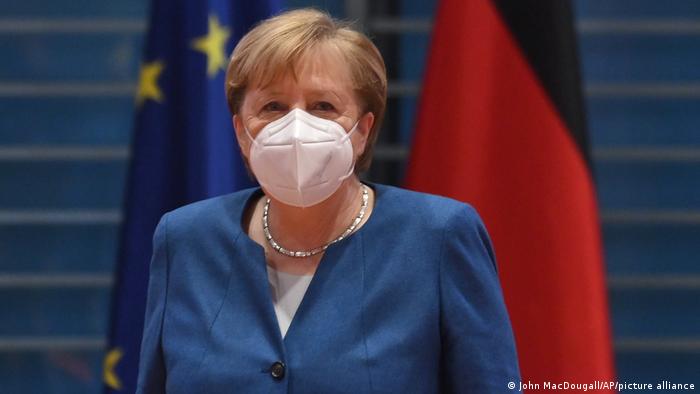 German Chancellor Angela Merkel and the country's 16 state premiers are expected to extend an ongoing lockdown in talks on Tuesday afternoon, as the nation grapples with a new strain of the virus and stable but persistently high infection rates.

The next round of talks was originally scheduled for January 25, but leaders called for the meeting to be moved up, as the current restrictions are set to expire at the end of the month.

Germany has closed schools, non-essential shops, bars and restaurants under a lockdown that has been in effect since early November, but leaders are mulling even tougher restrictions, as the number of new infections has not been substantially reduced.

One expected outcome from the talks is the extension of the current lockdown until at least February 15. Other issues being discussed include a rule to require employers to allow staff to work from home if that is feasible, and a requirement to wear FFP2-standard masks in shops and on public transport. The tighter mask-wearing rule was already introduced in the southern state of Bavaria at the start of the week.

Tuesday's meeting comes just after a group of scientists pleaded with state leaders to tighten restrictions, and warned of a rapid spread of new mutations of the virus.

Rolf Apweiler, director of the European Bioinformatics Institute in Cambridge warned that the new, highly infectious UK strain, called B117, was responsible for six to eight times as many cases per month than the conventional virus. He called for a "sharp lockdown," a rapid vaccination program and widespread gene sequencing to detect variants of the virus.

However, if the political will to implement stronger measures is lacking, even the best testing strategies will be of no use, said Apweiler.

Meanwhile, the Berlin Institute of Technology mobility researcher Kai Nagel warned that the B117 mutation would spread throughout Germany by mid-March. He called for heavy restrictions on activities outside the home, an evening curfew and a mandate to wear FFP2 masks in the workplace. If schools are to be opened, classes should be cut in half and students should also be made to wear FFP2 masks, he said.

A new variant of the virus was also found in a hospital in Bavaria this week with researchers looking into its properties. However, over 12,000 changes in the sequences of the virus have been detected to date, and doctors have not as yet indicated that the Bavarian strain shows signs of being more infectious than the standard coronavirus.

Government spokesman Steffen Seibert on Monday said that the curve was flattening, but the number of new cases was "still far too high."

Despite calls for a stronger mask requirement, Berlin Mayor Michael Müller told public broadcaster ARD that he was uncertain whether a requirement to wear FFP2 masks in public would be effective or necessary.

Instead, Müller, along with the group of scientists who spoke with Merkel on Monday evening, has proposed surgical masks as an alternative to the conventional fabric masks that many people wear. "They also offer significantly more protection than the cloth masks that many now wear," he said.

“So-called surgical masks, this simpler variant [of FFP2 masks], is a big step forward,” said Müller. "And we will definitely do something about that."

Some experts have also cited the relatively high cost of the masks – in comparison with standard surgical masks – as a reason not to require them.

This week, the government extended an offer to send vouchers for FFP2 masks to 34.1 million at-risk citizens. Those identified as vulnerable will be able to collect 12 of the masks at pharmacies, once the vouchers are sent out in the coming days.

Over 2 million people have caught the coronavirus, and more than 47,000 people have died in Germany since the start of the pandemic. On Tuesday, the number of confirmed cases rose by 11,369, while the death toll rose by 989. That represents only a slight reduction compared to the previous Tuesday, but also a marked improvement compared to figures regularly recorded in late November and December.

Germany ill-prepared for second round of school closures

Brazil's vaccination program has begun after emergency approval was granted for the vaccines produced by Sinovac and AstraZeneca. Australia says it may not fully reopen its borders this year. Follow DW for the latest.