A German official has warned that Berlin may impose fresh controls on the borders with France and Switzerland. With a surge in migrant arrivals to Spain, Germany is hoping to avoid a repeat of the 2015 migration crisis. 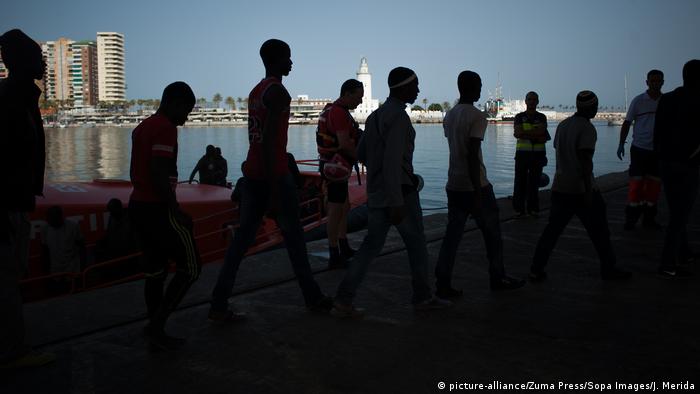 German authorities are considering stronger controls along the French and Swiss borders, Helmut Teichmann, junior minister for migration at the Interior Ministry, told the Bild am Sonntag newspaper.

Teichmann said authorities are alarmed by the increased number of migrants arriving to Spain after Rome prevented boats carrying migrants to dock at Italian ports. Italy had become the main entry point to the EU for irregular migrants after the so-called Balkan route was closed in 2016.

"We fear that many migrants could make their way to France, the Benelux countries and Germany," Teichmann said. He added that German authorities are ready to provide assistance to Spain to better handle a new wave of migration.

Spain has witnessed nearly 21,000 migrants arrive to its shores across the Mediterranean between January and July, according to the International Organization for Migration (IOM). On Saturday, the Spanish coast guard rescued 395 people from nine boats.

"As remarkable as Spain's rise in irregular migration activity has been through 2018, even more important is its recent surge," the IOM stated last week.

Read more: Is Spain facing a new wave of xenophobia?

The increase coincides with warmer weather on the Mediterranean and the Italian government's new policy targeting irregular migration.

But Berlin is hoping to avoid a repeat. Over the past month, the Interior Ministry has established transfer centers at the Austrian border and "Anker" centers to hold and process asylum-seekers.