Germany Commemorates Unification | Germany| News and in-depth reporting from Berlin and beyond | DW | 03.10.2005

In cities and towns across Germany, the country is looking back on fifteen years of German unity. In the central ceremony in Potsdam, politicians praised the accomplishments of the "peaceful revolution" in East Germany. 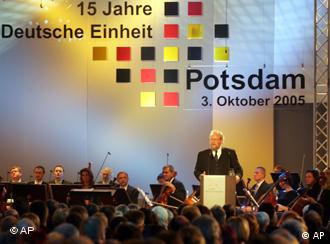 The main ceremony is being held in Potsdam, just outside of Berlin. There President Horst Köhler, Chancellor Gerhard Schröder, Christian Democratic leader Angela Merkel and other top political figures are attending the commemorative events.

Potsdam, which is the capital of the state of Brandenburg, was chosen to host the central ceremony because that state now has the chairmanship of the Bundesrat, the upper house of parliament.

Wolfgang Thierse, Social Democratic parliamentarian and president of the Bundestag, praised German reunification as a result "achieved with difficulty" of the peaceful revolution that took place in 1989 in the German Democratic Republic, or East Germany. He described the downfall of the East German dictatorship as a "happy chapter" of German history. 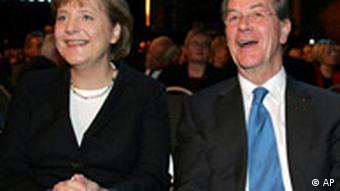 Angela Merkel, left, and the Social Democratic chairman, Franz Müntefering, right, smile together prior to the start of the celebrations for the 15th anniversary of German reunification in Potsdam.

In reference to Germany's current difficult times -- economic stagnation, particularly in the east, political uncertainty after inconclusive federal elections, and contentious debates about reforming welfare and labor laws -- he reminded those in attendance that one should not forget that the euphoria of large accomplishments are often followed by more sober periods and "laborious small steps."

Matthias Platzeck, premier of Brandenburg and another Social Democrat, warned of "exaggerated pessimism" when looking at the previous 15 years of unity. He admitted that there had been mistakes in the process, but said one should not lose sight of the positive things that had been accomplished.

Unlike, for example, Independence Day celebrations in the United States or Bastille Day events in France, there was little flag waving or outbreaks of national pride in Germany on Monday. It was instead a rather sober day of discussion and looking back. That is partly to do with Germans' general reticence to ever wave a national flag, partly due to the insecurity over the current state of the nation and mixed feelings about whether the country is better off today than it was a decade and a half ago.

The series of events began with an ecumenical service in Potsdam's Nicholaikirche. The head of the Protestant church in Germany, Wolfgang Huber, emphasized in his sermon that the controversial reforms now being undertaken in Germany, and seen with much trepidation particularly in the eastern part of the country, would find more acceptance if they were made in the "spirit of social justice." 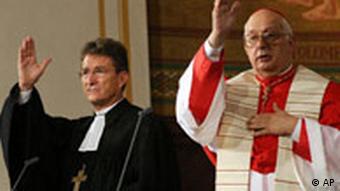 Berlin's Archbishop Georg Sterzinsky, who also spoke at the religious service, said much had changed for the better in the past 15 years, but that unification had also give rise to new worries, such as fear of unemployment. Those emotions, he said, had to be taken seriously.

Later Monday evening Helmut Kohl, chancellor at the time of reunification, will be awarded the Quadriga Prize, an award that recognizes people who have set outstanding examples in the political, social or economic fields. Former Soviet President Mikhail Gorbachev will give a speech in Kohl's honor.

Several leaders of the union bloc of parties, the Christian Democratic Union and the Bavarian Christian Social Union, will be on hand at a ceremony in the village of Mödlareuth, which was once divided since it straddles the border between Bavaria and Thuringia, once states of West and East Germany respectively. During Germany's division, Mödlareuth was known as "little Berlin," since it, like the city, was split in two by a wall.

Germany is gearing up for its national day, when the country celebrates the Oct. 3, 1990 unification of West and East Germany. DW-WORLD spoke to the foreign minister at the time, Hans-Dietrich Genscher. (Oct. 3, 2005)

The German government has, over the past years, been harshly criticized for its investment in rebuilding the former East Germany, but Berlin is sticking to its program of support. (Sept. 29, 2005)

West and East Germany became one country on October 3, 1990, less than a year after the Berlin Wall fell. Read a selection of articles on the subject.