With divergent platforms and a promise to have a new government before Christmas, the Social Democrats, Greens and business-focused Free Democrats have their work cut out for them. 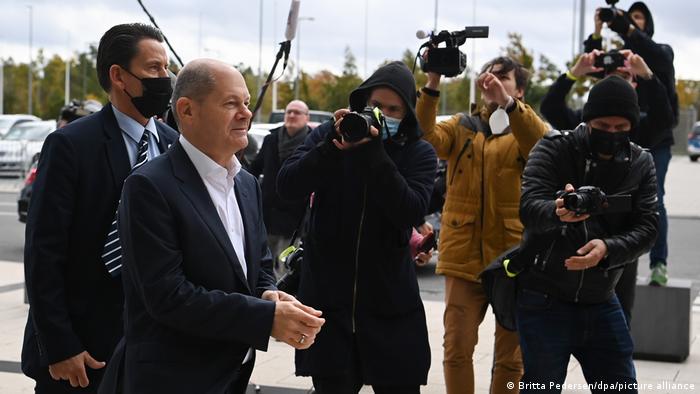 Germany's likely next chanellor, Olaf Scholz of the Social Democrats, arrives at the talks

Nearly a month after Germany's federal election, official coalition talks finally got underway on Thursday. Leading figures from the center-left Social Democrats (SPD), business-focused Free Democrats (FDP) and the Greens met in Berlin in the hopes of forming a government as soon as possible.

Olaf Scholz of the SPD, the likely future chancellor, has promised a new government by Christmas, hoping to spare Germany the six months of protracted coalition negotiations that went on after the last election in 2017.

As delegates arrived, the three parties announced that they had formed 22 working groups to hammer out all the issues, with the hopes of having a coalition agreement to present to the public by the end of November. They also vowed to hold a vote in the Bundestag to elect Olaf Scholz chancellor during the week of December 6. This would leave outgoing Chancellor Angela Merkel 11 days shy of breaking Helmut Kohl's record as Germany's longest-serving chancellor.

What have the parties agreed to so far?

Preliminary agreements reached during the exploratory talks included not raising taxes or increasing the amount of debt that the government can take on — both darling policies of the FDP.

The parties also agreed on raising the minimum wage to €12 ($13.90) per hour, as had been one of the campaign pledges from the Social Democrats.

For the Greens, the main policy win was an accelerated ending of coal production, as well as a raft of other climate policies. However, they gave up their hotly contested plan to impose a general speed limit on German highways.

In addition, the Greens want to create a climate task force during the first 100 days that will meet weekly to coordinate between the ministries and have a veto if new laws are not compatible with the Paris Agreement.

Ricarda Lang, deputy chairwoman of the Green party, told DW that it was "always clear that every government we will enter into has to agree on the Paris Agreement and therefore on reducing CO2, and I think now that we have built a ground for this."

She added that they would be pushing for an expanded child allowance to make things easier on working families: "in a rich country (like Germany), no child should grow up in poverty."

What are potential stumbling blocks?

Before the exploratory talks began, there was already some question as to how the parties could reconcile the fact that the Greens and SPD have a different view of Germany's future than the FDP.

While some progress has been made on that front, there is some criticism, especially from the more progressive wing of the Greens, that the party has sold its soul to be in government and is not sticking close enough to its core values.

Michael Kellner, the federal manager of the Green party, said that there needed to be concrete plans to step away not only from coal, but also other fossil fuels and the internal combustion engine altogether. He told public broadcaster ZDF that the parties also need to lay out policies to reduce the harm of airplane travel to the environment and to promote better train travel.

There have also been reports that the FDP has demanded that the other parties abandon a plan to introduce a general speed limit on German highways. Climate researchers have suggested that a speed limit would help Germany reduce its emissions.

Protesters gathered outside the meeting on Thursday, demanding that the new government put climate protection at the forefront of its talks.