Bavaria's Markus Söder has said the ball is in the CDU's court to decide on a chancellor candidate, and refused to take part in a snap CDU meeting led by rival Armin Laschet. 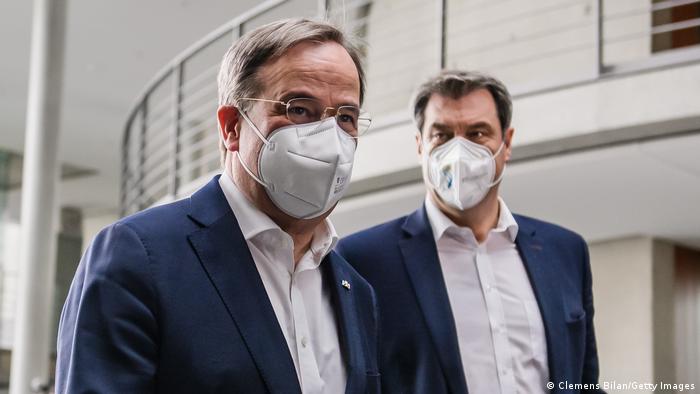 The question of which conservative candidate will run to succeed German Chancellor Angela Merkel remained unresolved Monday, as pressure mounted for Germany's biggest political bloc to choose a candidate.

Despite promises of meeting a "deadline" on Sunday, lengthy overnight talks between the candidates failed to yield any results.

Bavarian premier Söder said on Monday that he would take on the candidacy if he were to receive "wide support" from the CDU.

At a snap CSU press conference in Munich, the CSU leader added that would also support a decision for Laschet, essentially leaving it up to the CDU's leadership to decide.

"If the CDU can confidently come up with a clear decision tonight, we will respect that," Söder said, adding that he would fully support a Laschet candidacy.

"The CDU is the stronger and bigger sister party and only they can decide if this broad majority is there or not," Söder said.

Ahead of Söder's press conference, Laschet told reporters that he had called a special CDU teleconference for Monday evening, where he would lay out his proposal to "solve this issue quickly."

"I have therefore invited Markus Söder to take part in this meeting, just as I am prepared to go to the CSU board," Laschet said.

"I hope that we can come to the necessary decisions very quickly this week," he added.

However, Söder said during his press conference said he did not want to "interfere" with the CDU's decision-making, and pledged he would not hold a "grudge" if the party chooses Laschet.

When convening the Monday meeting, Laschet said, "Today is the day to decide this."

As CDU leader and premier of Germany's most populous state, North Rhine-Westphalia, Laschet, would normally be a shoe-in for the chancellor candidacy. However, the CDU's popularity has taken a beating recently, as the federal government is under pressure over its handling of the coronavirus pandemic.

Söder enjoys higher national poll ratings compared to Laschet, which could make him a more competitive candidate. However, Laschet has the political support of the CDU leadership.

As neither candidate has yet to back down, the debate is now focused on the possibility of an internal vote to break the deadlock. Outgoing Chancellor Merkel has said she will stay out of the competition to decide her possible successor.