Germany Calls for Aid to Refugees Caught in Sri Lankan Conflict | Germany | News and in-depth reporting from Berlin and beyond | DW | 22.01.2009

German Foreign Minister Steinmeier called for a negotiated ceasefire between the Sri Lankan government and Tamil rebels to allow for the delivery of humanitarian aid to civilians in conflict areas. 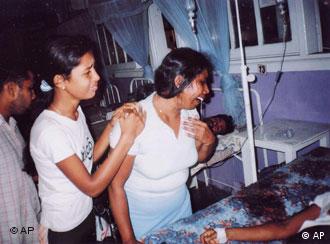 300,000 civilians have been cut off from aid due to government clashes with rebels

German Foreign Minister Frank-Walter Steinmeier called Thursday, Jan. 22, for humanitarian assistance to be delivered to civilians cut off by government and rebel clashes in the north-eastern region of Sri Lanka.

Steinmeier expressed concern for more than 300,000 refugees on a coastal 30-kilometer strip of land, in the area held by the Liberation Tigers of Tamil Eelam (LTTE) rebel group.

"They have been completely cut off from international aid for more than 10 days," the German foreign minister said.

"The most important thing now is to negotiate a ceasefire, to enable aid deliveries and medical care for the civilians in the disputed areas," he added.

Steinmeier also called for the conflicting parties to urgently come to a political agreement. "The conflict won't be solved by military means alone," he said.

The LTTE claimed Wednesday that at least 17 civilians were killed and over 50 were injured in shelling by government forces since Monday. The military denied the claim.

The German Foreign Office has pledged a further 1 million euros ($1.29 million) to the International Committee of the Red Cross (ICRC), bringing the sum of German humanitarian aid for the region to 5.9 million euros since 2006.

International aid organizations were advised by the Sri Lankan government to leave the disputed north-east region in September 2008.

The United Nations World Food Program and the ICRC are the only two aid organizations operating in the region.

Germany's ambassador to Colombo recently angered the Sri Lankan government with comments made at the funeral of a murdered newspaper editor.

"Maybe we should have spoken before this. Today it is too late," Juergen Weerth said at the funeral on Jan.12 of Lasantha Wickrematunge, editor of the anti-government The Sunday Leader newspaper.

The eastern part of Sri Lanka was secured from Tamil rebels in 2007, but sporadic incidents have been taking place in the area.

The shelling of two military helicopters transporting ambassadors from France, Germany, Italy, Japan, the US and delegations from the EU and UN was among the worst violence targeted against foreigners. (27.02.2007)