The heat wave has shut down Hanover's airport, damaged roads and devastated crops — with higher temperatures expected. In AC-starved Germany, experts are warning people to heed the heat and even go home early from work. 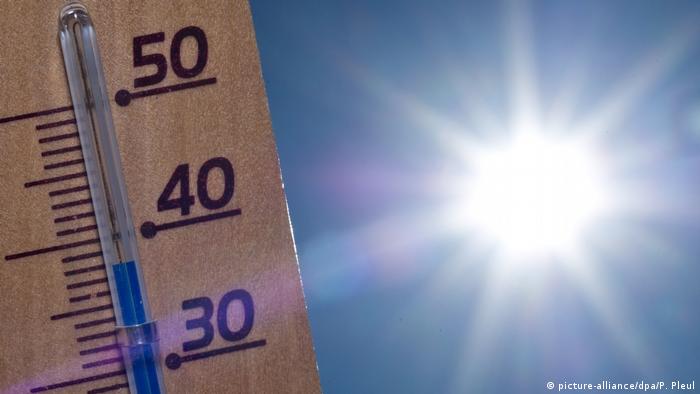 Germany braced itself Wednesday for sweltering temperatures that could reach up to 36 degrees Celsius (96.8 Fahrenheit) in some places.

On Tuesday, temperatures peaked at 35.9 degrees in the northern town of Lingen, with little relief overnight as temperatures in several large cities hovered around 20 degrees.

"It cooled down a bit last night — although, 'cooled down' is a bit of an overstatement," a spokesperson for Germany's National Meteorological Service (DWD) told the news agency DPA.

The DWD has issued heat warnings for most areas of Germany on Wednesday, excluding some areas in Bavaria and eastern Germany.

As climate change continues to have an impact on the environment, scientists have warned that Germany's unusually hot summer could soon become the norm. 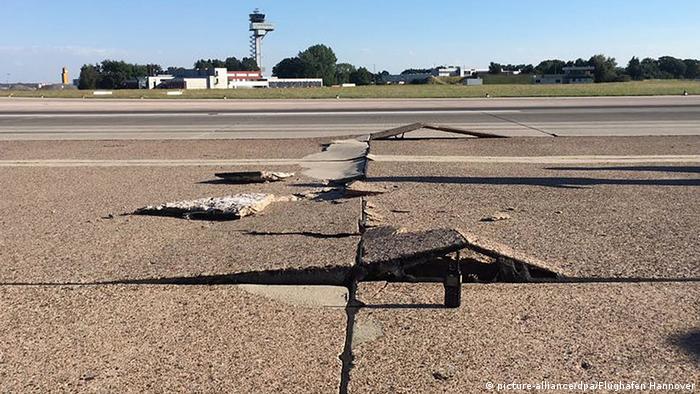 Parts of the runway at Hanover Airport buckled in the heat

Hanover's airport resumed flights early on Wednesday morning after temporarily shutting down because of damage caused by the heat.

Planes landing in the high temperatures damaged several areas on the tarmac, prompting the airport to halt all flights on Tuesday evening. An airport spokesman said 41 departures and 44 arrivals were affected by the delays.

The heat is also causing headaches for travelers on Germany's highways. Since the high temperatures can cause concrete slabs on the roads to break, authorities have placed a speed limit of 80 kilometers per hour (50 mph) on sections of the A7 and the A81 near the southern cities of Stuttgart and Ulm.

Health and weather experts are warning people to stay hydrated and keep cool as possible in air conditioning.

Most homes, offices and schools in Germany do not have air conditioning. In situations of extreme heat, students and employees are sometimes allowed to leave work and school early to cool down as much as possible at home.

Andreas Matzarakis, a medical meteorologist with the DWD, urged workers to take those opportunities and the heat warnings seriously.

"If your employer allows flexible working hours, try starting work early in the morning and go home in the afternoon in order to spend fewer hot hours in the office," Matzarakis wrote in an article for the newspapers of the RedaktionsNetzwerk Deutschland.

The heat and lack of rainfall has Germany's agriculture sector extremely worried. The German Farmers' Association is expecting a loss of €1.4 billion ($1.6 billion) because of dead and dwindling crops.

German beer producers, on the other hand, have seen a boom in business during the sustained hot temperatures. They're now contending with a shortage of bottles and have urged the public to return their bottles, which are reused in Germany under a deposit system.

The heat has also caused temperatures in the Baltic Sea to rise, bringing an increased risk of being infected by the vibrio bacteria. Health officials in northern Germany warned people with wounds or compromised immune systems not to go swimming.

With extreme heat and drought conditions drying out fields and rivers, the risk of wildfires in northern Germany is extremely high.

Massive wildfires have already broken out in Sweden and Greece, where they have killed at least 74 people.