Germany bounces back into growth, but not too much

After contracting in the first year of the coronavirus pandemic, the German economy began to grow again in 2021. However, the upturn is not as strong as was hoped. 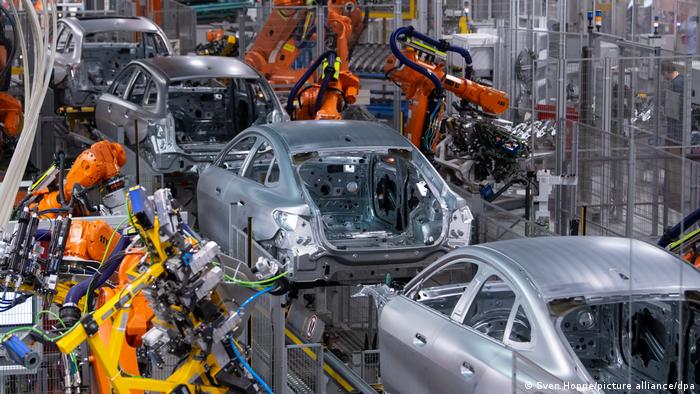 Europe's biggest economy showed signs of recovery in 2021 — growing after it contracted nearly 5% in 2020.

The latest figures show Germany's GDP growing by 2.7% last year. The figure is lower than what economists have been hoping for, echoing the concerns of industry leaders there that a "post-coronavirus boom" has yet to materialize.

What did the figures show?

However, the 2021 jump was not enough to neutralize the shock suffered in 2020, when production fell sharply and shrunk the GDP by 4.6%.

The new figures show Germany's economic performance has not yet reached pre-crisis levels, and its GDP last year is still 2% lower than it was in 2019.

The country still struggles with rampant coronavirus infection rates, which have led to renewed restrictions in the retail sector as the pandemic causes supply bottlenecks worldwide.

"Despite the continuing pandemic situation, more delivery bottlenecks and material shortages, the German economy managed to recover from the sharp fall last year, although economic performance has not yet reached its pre-crisis level again," Thiel said.

The German Federation of Industries on Thursday said the economic upswing in Germany had not yet gathered pace amid ongoing pandemic-related uncertainty.

Economists now believe that the economy will not really pick up again until the spring of 2022.

"On the whole, 2021 was a big economic disappointment for Germany," Carsten Brzeski, head of macroeconomics at the bank ING, told the AFP news agency.

"Despite the big fiscal stimulus given by all European countries, Germany is not coming out of the pandemic stronger or faster than anyone else; rather, as one of the last," Brzeski said.

Public spending in the red

Government budgets recorded a financial deficit of €153.9 billion ($176.2 billion) at the end of 2021, according to provisional calculations.

The figure is slightly more than in 2020 and the second-highest deficit since German reunification.

The deficit for the central government was €155.3 billion in 2021, slightly more than the figure for all levels of government. State government and social security funds also showed deficits, but these were minimal.

That was offset slightly by local government, which actually managed to record a small surplus of €3.1 billion euros.