German President Frank-Walter Steinmeier has recognized General Jens Arlt for his role in the evacuation process in Afghanistan. The German mission airlifted some 5,300 people from Kabul. 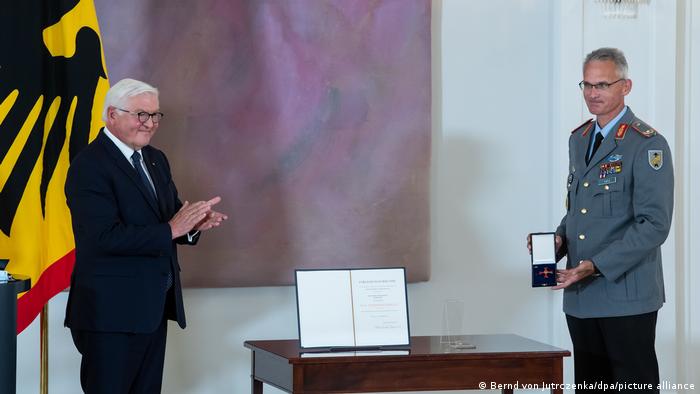 President Frank-Walter Steinmeier bestowed one of Germany's most prestigious awards on Friday to the military commander who led the country's evacuation process from Afghanistan.

Steinmeier presented the Order of Merit to Brigadier General Jens Arlt at the presidential residence at Bellevue Palace in Berlin.

He heaped praise on Arlt's leadership after conducting an operation the head of state described as "unprecedented" in Germany's post-World War II history.

Steinmeier thanked Arlt for his "outstanding service" as part of the "successful mission" that managed to evacuate more than 5,300 citizens, representing 45 countries, from Kabul. It was part of a wider international effort to airlift 120,000 people in the wake of the Taliban takeover.

"Today we are honoring a special mission," Steinmeier began. "An evacuation the likes of which have never been seen before in the history of the Bundeswehr."

"Together with our allies and partners, first and foremost the United States, more than 120,000 people in need of protection were flown out. People whose lives were acutely threatened under Taliban rule because they had worked for German agencies over the past two decades."

Steinmeier noted that Arlt had managed to bring home all 500 troops unharmed, despite the danger involved.

Arlt, for his part, said the evacuation was a "team effort" and that he was receiving the honor in the name of all those he had led.

Steinmeier, though, recognized that there were still many "painful questions" about the 20-year mission by Western powers.

He added that "we bear some of the responsibility for human tragedy" in Afghanistan.

Evacuated Afghans stranded in Germany due to measles

Thousands of Afghans are being forced to stay at Ramstein air base after a measles outbreak stopped them from flying to the US. Dozens more were denied entry to the UK.