Germany and Austria call for EU summit on refugee crisis

The leaders of Germany and Austria have called for a unified European response to the refugee crisis. Angela Merkel said the summit need not be about a quota system for redistributing asylum seekers. 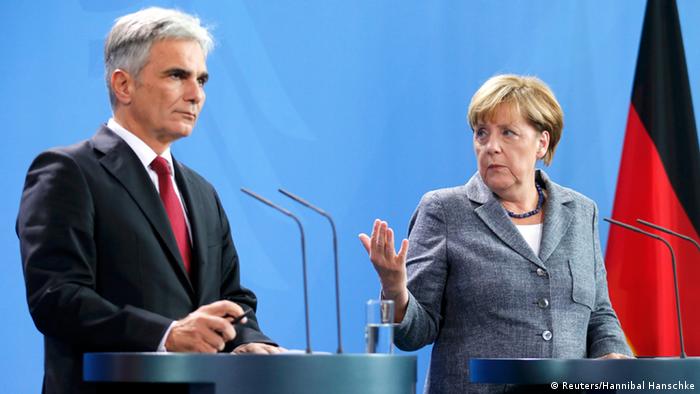 At a joint press conference on Tuesday, German Chancellor Angela Merkel and her Austrian counterpart Werner Faymann called for a European Union summit next week to address the refugee crisis. Their two nations and Sweden cannot handle the unprecedented influx on their own, the pair said in Berlin.

Merkel also took the opportunity to defend Germany's decision to temporarily reinstate border controls on the Austrian frontier, which some critics have called an about-face from the past weeks' rhetoric of solidarity and understanding. Merkel said the move was simply to make it easier to register the refugees.

The German chancellor said that the EU must return to a "European spirit" of solving problems together a day after the bloc's interior ministers failed to reach an agreement on the redistribution of refugees based on each nation's population and wealth.

Merkel said that next week's summit would not necessarily entail outlining a redistribution plan.

"Threats are not the right way to unity," the chancellor added, saying that was not the way to achieve an EU-wide agreement.

She suggested that Europe assist the nations from which the refugees are coming and work more with Turkey - which with 2 million refugees is sheltering the most asylum seekers who have fled the violence in Syria.

Germany wants to cut European Union funding to countries that refuse to share the burden of hosting refugees under a quota system. A crisis meeting of EU ministers failed to reach an agreement on managing the influx. (15.09.2015)

Hungary in 'state of emergency,' locks down border

Hours after a new law to stop refugees from crossing illegally came into force, Budapest has declared a state of emergency on its southern border. On Monday, more than 9,000 people entered the country. (15.09.2015)