Germany Agrees on Next Step Towards Total Smoking Ban | Germany| News and in-depth reporting from Berlin and beyond | DW | 26.05.2007

Germany Agrees on Next Step Towards Total Smoking Ban

German politicians on Friday approved a ban on smoking in government buildings and on public transport that is due to take effect on September 1. 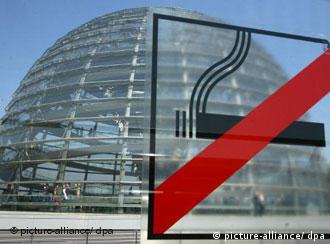 From then, it will be forbidden to light up in stations, trains and taxis as well as in all federal administration buildings, except in designated smoking corners, under the new bill approved by the
Bundestag or lower house of parliament.

The ban still has to be approved by the upper house of parliament which represents Germany 16 states to become law.

The bill also raises the legal age limit for buying tobacco from 16 years to 18.

Next step in ending smoker's paradise

Germany has long been regarded as a smoker's paradise in Europe because of its lax legislation but is gradually coming in line with trends on the rest of the continent.

Ireland, Italy, Malta, Norway and Spain have banned smoking in bars, restaurants and public places, while Britain and France have also passed laws or decrees banning smoking in designated areas.

In February, Germany's 16 states agreed to a limited smoking ban in restaurants and cafes but left a wide berth for regions to create loopholes.

Despite Planned Ban, German MPs Fight For Right to Light Up

The German government last month agreed to ban smoking in public transport and federal buildings. But its own backyard seems to be an exception with some parliamentarians reluctant to stub out. (10.03.2007)