More than three-quarters of Germans want the successor of Pope John Paul II to be less "rigid" about sexual morality and end the Church's ban on contraception, according to a poll published Saturday. 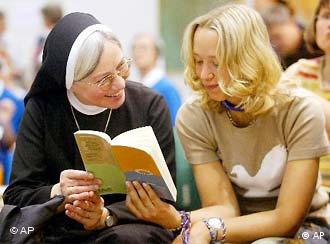 Polls show that Germans give growing importance to religion

About 78 percent of those surveyed said they were in favor of the Catholic Church ending its ban on contraception, and 76 percent wanted the next pope to authorize the use of condoms as part of the fight against the spread of AIDS, the poll said.

In addition, 77 percent of respondents said they wanted to see the ordination of women as priests and 74 percent think that imposing celibacy and chastity on priests is no longer expedient. 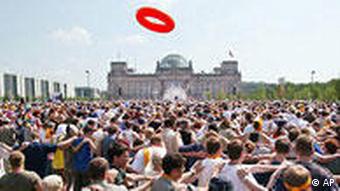 About 100.000 Catholic and Lutheran Christians pray during the closing church service at the t German ecumenical church convention in front of the Reichstag building,Berlin on Sunday, June 1, 2003.

The poll was conducted April 4-6 by the Polis Institute and surveyed 1,010 people aged 14 and older. Another poll, taken in February well before the pope's death on April 2, showed that Germans give growing importance to religion, which is particularly significant in the east of the country, part of the former Communist bloc.

That poll found that 23 percent of respondents in eastern Germany think their faith is "very important in their life" compared with 14 percent in 1993, four years after the fall of the Berlin Wall.

In the west of the country, 27 percent of those surveyed shared the same view compared with 24 percent in 1993. At the same time, 47 percent of Germans in the east and 23 percent in the west say they never go to church. 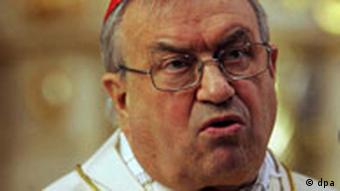 Separately, the head of the German bishops' conference, Cardinal Karl Lehmann (photo), said there was "no clear favorite" to succeed John Paul II, in an interview published Saturday.

He told the Allgemeine Zeitung in the western city of Mainz, where he is cardinal, that there did not appear to be any

"well-established alliances" among the 116 cardinals who are in the conclave that will select the next pope.

"Through our polls, our contacts and our discussions, we will have to reach a consensus," he said, adding that the cardinals had until April 18 -- the start of the conclave -- to get to know each other better. 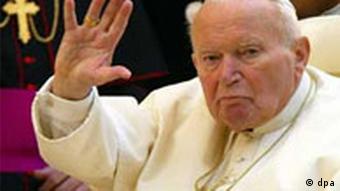 Lehmann, a prominent Church liberal who occasionally clashed with the pope, said his successor would have to approach the stature of the late pontiff "but not in the sense of being a copy" of the John Paul II, who died April 2.

A Life at Odds With the Germans

Pope John Paul II's only travel abroad this year was supposed to be to Germany. In the country of the Reformation, the first pope from Poland had strained relations with both Catholics and non-Catholics in Germany. (April 4, 2005)

As the financial difficulties of Germany’s mainline churches grow, parishes are increasingly facing the painful prospect of selling off their houses of worship. Some are deconsecrated and become secular establishments. (March 31, 2005)

German Dissenter Speaks Out on Pope

As Catholics mourn Pope John Paul II, an anti-establishment former priest in Germany has condemned the funeral preparations as ghoulish and called for the new pope to be less authoritarian. (April 6, 2005)