Germans Still Reticent About Involvement in Mideast Mission | Germany | News and in-depth reporting from Berlin and beyond | DW | 07.08.2006

They may not have rejected outright Israeli leader Olmert's wish to see German peacekeepers in the Middle East, but German politicians harbor deep reservations about the controversial proposal. 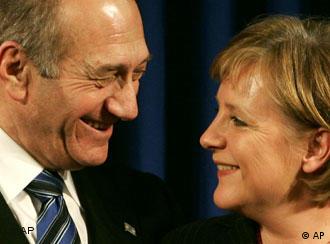 Israeli Prime Minister Ehud Olmert said in an interview recently that he would welcome the participation of German soldiers in a stabilization force in South Lebanon.

There is no other nation that Israel considers more of a friend that Germany ... I would be very happy if Germany participated," Olmert told German daily Süddeutsche Zeitung last week. "I have informed Chancellor Angela Merkel that we have absolutely no problem having German troops in South Lebanon."

The Israeli leader may have no problem, but Germany certainly does.

Ever since the publication of Olmert's interview, the country is witnessing an intense domestic debate about the rights and wrongs of such a move.

The German government has not entirely ruled out sending troops to the Middle East. Though Chancellor Angela Merkel has rejected any immediate deployment of troops, Defense Minister Franz Josef Jung said last month that if both sides in the conflict and the international community requested German participation, it would be difficult for Berlin to decline.

But, many citizens and politicians remain uneasy about sending soldiers to the region. 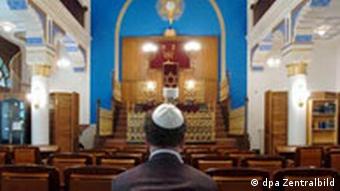 Foreign Minister Frank-Walter Steinmeier said last month that talks about Germany's involvement in a possible international peacekeeping force on the Israeli-Lebanon border were being treated with great sensitivity.

"I think this is appropriate given the difficult shared history between Germany and Israel," he told German broadcaster ZDF.

Few doubt that more than 60 years after World War II and the Holocaust, in which the Nazis killed about six million Jews, sending German soldiers to the region would be far from controversial.

In an interview with German daily Die Welt on Saturday, Erler said German troops could possibly be involved in reconstruction and training the Lebanese army and police, but not in firing on Israeli troops, if necessary, given Germany's persecution of Europe's Jews during its Nazi past. 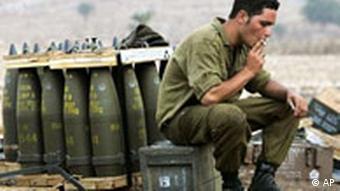 "It's difficult to imagine German soldiers armed with guns facing off against Israelis," Erler said.

Others have voiced concern that Olmert's explicit mention of a German role in the future peacekeeping mission would work to the country's disadvantage and would make it make it difficult for Germany to stay neutral. Germany will be seen as "partisan" in the eyes of the Arab world, said Oskar Lafontaine of the opposition Left Party.

Some have criticized Olmert's statement that an international peacekeeping force would, above all, serve to protect Israel from further attacks by the Shiite militant group Hezbollah instead of securing stability in Lebanon after a ceasefire between Israel and Hezbollah.

"A peacekeeping force is no 'pro Israel' force, but rather it's meant to be neutral," Birgit Homburger, a defense expert of the opposition free-market liberals, FDP, told news agency Reuters.

On a more pragmatic note, some German politicians have emphasized that Germany's armed forces are already overstretched with peacekeeping deployments as far away as Congo and Afghanistan and simply lack the resources to participate in the Middle East.

Though there is almost unanimous agreement that it's too premature to talk of German participation given the fact that there's still no UN mandate or framework for an international peacekeeping force in the Middle East, some believe that Olmert's frank talk may have opened up much-needed debate on what has long been considered taboo.

Olmert's wish does show "that all those who have categorically ruled out German participation on historical grounds and thus seized control from us on how to formulate a mandate (for the peacekeeping force) have been wrong," Eckart von Klaeden, foreign policy expert of the Christian Democrats (CDU) told news agency Reuters. 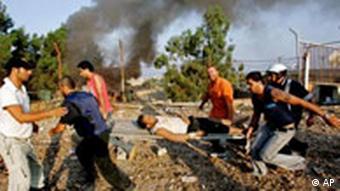 Foreign Minister Steinmeier called Olmert's wish to see German peacekeepers in the Middle East as a "noteworthy proof of trust" and one which made apparent "the extraordinarily good development between Israel and Germany in the past decades."

But, first the mandate, scope and composition of the international peacekeeping force has to be clarified, Steinmeier added: "First the facts, then the decision."

A swift end to the Middle East crisis looked out of reach Monday as the UN failed to agree on a draft resolution to halt fighting and Israeli Prime Minister Olmert told European leaders to stop preaching to Israel. (Aug. 7, 2006)

Former Israeli ambassador to Germany Avi Primor backed the idea of German troops participating in a possible international peacekeeping mission in Lebanon as long as they were not stationed on the border with Israel. (Aug. 3, 2006)

German Chancellor Angela Merkel has said in an interview that at the present time she does not support the idea of German troops being part of a peacekeeping contingent in Lebanon. (July 29, 2006)