Germans Hope for Hollywood Ending to US Election Drama

Analysts warn Germans shouldn't expect a fairy tale ending to the US presidential election drama as it reaches its climax. But that hasn't stopped the media from hyping the election to an unprecedented level. 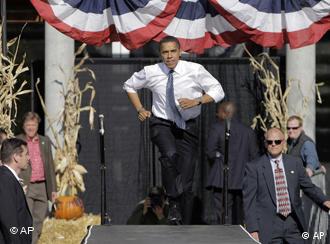 Berlin is six hours ahead of New York. That means it will be a long night for Germans who can't go to bed without knowing whether Republican John McCain or Democrat Barack Obama will be the next president of the United States.

Thomas Greven is one of those expecting to pull an all-nighter on Tuesday. The German media's obsession with the US presidential election has reached such a fevered pitch that even level-headed political scientists are staying up past their bedtimes.

"This is the fourth interview I'm giving today. It's a media frenzy," said Greven, a visiting professor at the John F. Kennedy Institute in Berlin, who is on call to give a play-by-play analysis for German media outlets into the wee hours of the morning.

Yet Greven and other political scientists warn that Germans who have fallen head over heels for Obama are setting themselves up for heartbreak, even if their candidate wins.

"There's bound to be disappointment on all fronts," Greven said.

Obama is favored to win going into Tuesday's voting. In the final pre-election Gallup-USA Today poll published Monday, Obama was leading his Republican opponent John McCain by 11 points -- 55 percent to 44 for McCain. Yet with an unprecedented 135 million people expected to cast ballots, the vote could end up being close in crucial states such as Ohio and Florida. 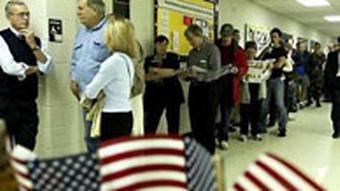 In the German public opinion, Obama has already won by a landslide. Polls show that nearly three out of every four Germans would like to see Obama win and he has similar support across Europe.

The German media have showered adoration on the telegenic Obama, believing he can usher in a new era to transatlantic relations, which have been badly strained during the eight years of President George W Bush. McCain is seen by many Europeans not as a self-styled maverick, but as a continuation of Bush's failed policies.

"A lot of people have a lot of big expectations linked to the elections," said Thomas Bauer of the Center for Applied Policy Research at the University of Munich.

"If Obama wins there will be a lot of smiling faces here (on Wednesday) and then the big disappointment a quarter of a year later," he predicted. 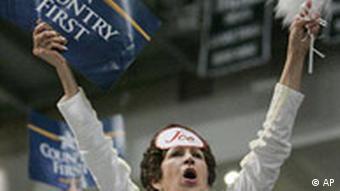 Both candidates will put US interests first

Europeans' love for Obama is based more on his persona than a long look at his stance on transatlantic relations, Bauer said. And the next US president will inherit an extraordinary set of emergencies that could force him to take some tough decisions.

The next US president will be expected to find solutions to extremely unpopular wars in Iraq and Afghanistan. He will be expected to take leadership on the global financial crisis which is threatening to pull both the United States and Europe into a deep recession.

Then there are thorny issues such as US opposition to Iran's desire to build nuclear weapons, the growing strength of al-Qaeda militants in Pakistan's tribal regions, Russia's bellicose stance towards its neighbors and Turkey's growing resentment of the US.

Germans love to point to Obama's opposition to the war in Iraq but conveniently forget that he wants Europe to increase troop levels in southern Afghanistan, a demand which would be wildly unpopular in Germany, Bauer said.

Obama and McCain have also said they will use military force if necessary against countries such as Iran, which Europe generally opposes, Bauer said. 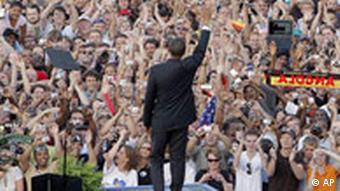 Obama recently got a rock star greeting in Berlin

For Dominic Dyer, the executive director of the London-based American European Institute, Obama would bring a different tone to discussions with Europe. It might just be a "change in mood music," but that can also be important, Dyer said.

"It's very easy to be cynical and say policies in Iraq and Afghanistan won't change" under an Obama presidency, Dyer said. But he thinks that Obama will continue to impress his European counterparts, even if they don't always agree with him.

"I think he's got opportunities to do things we wouldn't have expected," Dyer said.

US Election Predicted to Draw Record Numbers as World Waits

After a frantic 20 months of rallies, debates and commercials in the most expensive presidential campaign ever, record numbers are expected to turn out for the most important US election in a generation. (03.11.2008)

The Economist is one of the latest influential publications to support Democrat Barack Obama in the US presidential election. DW-WORLD takes a look at what it and other media have said in the campaign's final hours. (03.11.2008)

EU Foreign Ministers Agree Message for Next US President

The EU's foreign ministers met on Monday to agree on a joint message for the winner of the US presidential election, including how best to strengthen transatlantic ties. (03.11.2008)