Berlin has long held a reputation for harboring thousands of the animals, who often maraud local residents. This time a herd of them struck them right near the city's airport. 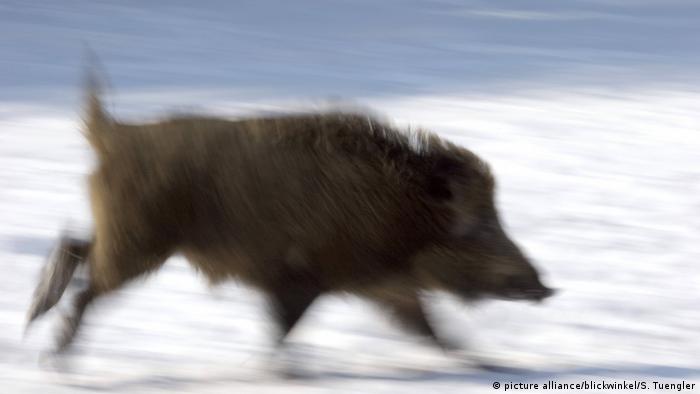 The German countryside is being overrun with deer who disrupt biodiversity in forests by eating young trees, environmentalists say. And hunters are only making the problem worse, they argue. (14.08.2015)

At about 2 p.m. the panicked herd attacked people at Kurt-Schumacher-Platz before bolting into the nearby Volkspark Rehberge, a 78-hectare (193 acres) lightly forested memorial garden.

There they attacked a woman and two men. By this stage police had arrived to control the situation.

Local media reported that it took authorities 18 shots to down one 200-kilogram boar, while the rest of the herd escaped.

People also posted their stories of the wild boar rampage on Twitter.

The outer rings of Berlin have long had a reputation of being overrun by marauding wild boar. Especially in the colder months, many of the 4,000-6,000 Central European boar in Berlin leave the safety of the city's many forests and forage in the urban areas, sometimes causing chaos. Several attacks are reported each year.

Culls are sometimes organized by the forestry department to deal with the boar.

In the city of Siegen, in North Rhine-Westphalia, a wild boar entered the inner city at 4 p.m. on Saturday. The animal crossed a busy street and evaded police by jumping through the glass door of a closed hairdressing salon.

Police barricaded the business with a patrol car while a hunter entered the shop and killed the boar.

In the Italian capital, droves of unwelcome hogs are causing a ruckus. Their ever-growing presence on the city's streets is causing a stink for populist Mayor Virginia Raggi — and her reelection campaign. Local politicians are trading accusations of who's to blame.