Germany's labor minister and deputy chancellor, Franz Müntefering, will resign from his position this month. His party and the national government announced his successors on Tuesday, Nov. 13. 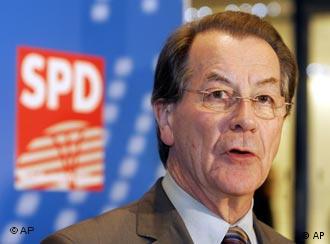 Franz Müntefering has been Germany's labor minister since 2005

Müntefering told a press conference in Berlin that his decision to resign was personal.

"One doesn't like to discuss these issues, but my wife has been gravely ill for some time," Müntefering said. 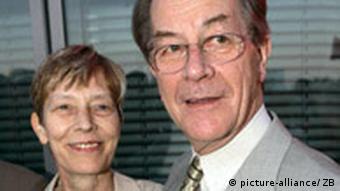 Müntefering's wife, Ankepetra, has been sick with cancer for a number of years. Müntefering said she had undergone five operations since 2001 and that it was becoming untenable to hold his political positions and support his wife at the same time.

The deputy chancellor emphatically ruled out a political motive for his decision to step down. He said his resignation would come into effect as of the Nov. 21.

Müntefering has played a key role in holding together the so-called left-right "grand coalition" government, but it has also been an awkward role. Müntefering has been described as Chancellor Angela Merkel's right-hand man, despite the fact that Merkel's conservative Christian Democratic Union (CDU) is the main political rival of Müntefering's Social Democrats (SPD). 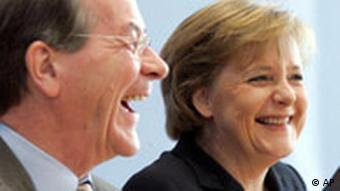 Michael Dauderstedt, from the Frederick Ebert Foundation, a SPD-aligned think tank, said the resignation was a blow to Germany's grand coalition government.

"Müntefering was more to the center than other larger parts of the SPD and probably some parts of the CDU left wing," Dauderstedt said. "He was very well positioned to function as a kind of bridge or consensus builder."

For this reason, Müntefering is likely to be missed by both political allies and rivals alike. CDU Secretary General Ronald Pofalla said his party respected the vice chancellor's decision to step down, and called Müntefering an "important support" in the "successful work of the coalition."

Coalition on the rocks?

Peter Ramsauer of Merkel's Bavarian sister party, the Christian Social Union, said he didn't see the resignation of Müntefering as posing any danger to the survival of the grand coalition.

"This doesn't mean that things will now go downhill," Ramsauer said Tuesday in Berlin. "There are other people who will step up to fill Müntefering's role."

Friction in the SPD 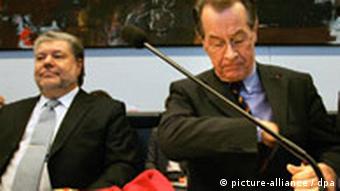 Beck knew of Müntefering's decision before it was made public

Müntefering's departure follows a public power struggle with Beck over the future direction of the SPD.

Müntefering was forced to accede to party demands last month and back proposals to unwind key aspects of former Chancellor Gerhard Schröder's labor market reforms. It has been speculated that the loss of this ideological battle within the party also contributed to Müntefering's decision to step down.

Germany's Social Democrats Hint at Shift to the Left

In an effort to pull itself out of a poll slump, Germany's Social Democrats have signalled they'll scale back a key reform passed by former Chancellor Schröder in order to win back the party's disillusioned base. (26.10.2007)

Unemployment in Germany fell sharply to 8.4 percent, its lowest in 12 years according to data released by the government Thursday, Sept. 27. Now, the country is facing a shortage of highly qualified workers. (27.09.2007)

What is your reaction to Müntefering's resignation? Please include your name and country in your reply