German Troops Dissatisfied with Armed Forces | Germany | News and in-depth reporting from Berlin and beyond | DW | 27.04.2007

Most German soldiers are extremely unhappy with their working conditions and their jobs, according to a new study. A shocking two-thirds of the soldiers would not recommend military service to friends and relatives. 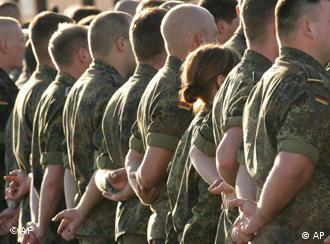 German soldiers are not a happy bunch these days

The poll of 45,000 soldiers of the German army showed that recent budget cuts and scandals have taken a serious toll on morale in the Bundeswehr.

German soldiers are so unhappy with their work that many regret having ever joined the army, the study by the Armed Forces Association shows. Two out of three said they feel let down by the government, especially by the defense ministry.

The Armed Forces Association represents the interests of Germany's professional soldiers. The chairman of the association, says he is not surprised by the result. He blames the dissatisfaction on a massive lack of funding which began at the beginning of the 1990s.

“We do not doubt that all the problems and concerns that have come to light now are due to poor funding," Gertz told DW-RADIO. "If we do not act now, the soldiers will be so frustrated that they simply won't be able to do their job properly.” 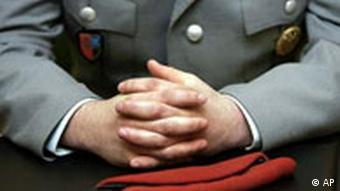 The poll is another huge blow to the Bundeswehr, whose reputation has suffered badly in recent months because of scandals about working conditions and abuse of recruits.

Gertz fears that even fewer German youngsters will want to join the army and the Bundeswehr recruitment problems will continue to multiply. Under Germany's conscription law, young men have to serve in the Bundeswehr or do social work for nine months. For girls participation in both options is voluntary.

A sampling of young people on the streets of Berlin elicited derisive comments about a career in the Bundeswehr.

"I didn't see any sense in romping through the forest and playing war," a young man said of his decision not to join. 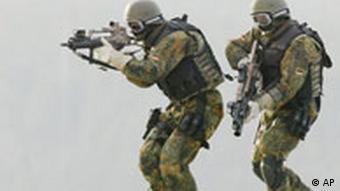 A 60-year-old man said he left the army as a youngster after only six weeks and encourages young people to do the same.

"It's a very stupid job because in fact you have a license to kill," he said.

Soldiers are aware of this type of criticism. Seven of 10 soldiers said they feel the government does not properly explain the purpose of foreign missions, according to the study.

Almost the same number of soldiers complains that the armed a forces are poorly equipped for such tasks. Less than 20 percent of soldiers surveyed said they had little to criticize and were generally happy.

The German Military: Underfinanced and Overextended

The German military needs to look at money and manpower before taking on more foreign missions, according to a report which examines the shortcomings of the Bundeswehr. No widespread mistreatment of recruits was found. (20.03.2007)

Bundeswehr Officials in Court Over Brutal Hazing of Recruits

Eighteen training officials from the German military were charged with the abuse of recruits. They could each face jail sentences of up to 10 years if found guilty of mistreating over 80 soldiers in 2004. (19.03.2007)

Bundeswehr soldiers complain about conditions in the army