Germany's transportation minister has unveiled plans to introduce a toll on cars using the country's roads. However, it is not clear whether the proposal will meet with the approval of the EU. 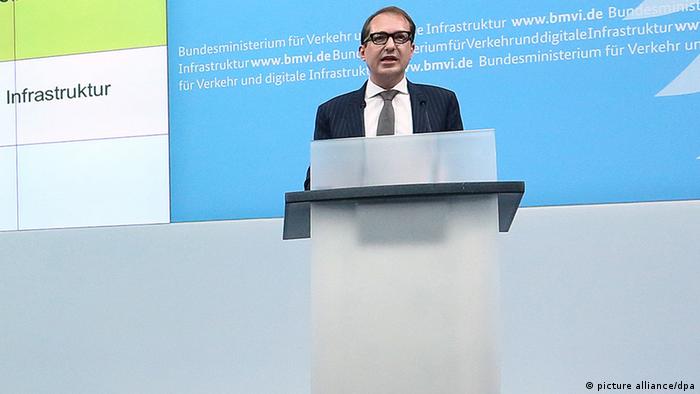 On Monday, Transportation Minister Alexander Dobrindt told reporters in Berlin that beginning in 2016 the toll would apply to all cars using all roads in Germany, and could even extend to motorcycles.

"It is true that we are considering making it applicable to all vehicles under 3.5 tons," the minister said.

Dobrindt said experts at the Transportation Ministry had calculated that the measure could generate about 600 million euros ($815 million) of extra revenue, to be invested in the maintenance and construction of Germany's roads.

The minister said that, if implemented, the new road toll would correct what he described as a "fairness gap," an apparent reference to the fact that German drivers have to pay road tolls when driving in neighboring countries such as Austria, Switzerland and the Czech Republic. Currently drivers from those countries have to pay no such toll in Germany.

He also said that for German drivers, the road toll would be revenue neutral, with people whose cars are registered in the country receiving a rebate on the tax that they already pay.

Dobrindt insisted that the proposal complied with European law and said that his ministry would "work closely and in cooperation" with EU officials to ensure that the actual bill being drafted would do the same.

He also said he had had a number of conversations about his plans with senior EU officials, including the transportation commissioner, Siim Kallas.

The European Commission has repeatedly warned Germany that any such toll must treat drivers from other EU countries equally.

"Nondiscrimination is a basic principle of EU law," a spokeswoman for Kallas said before Dobrindt had unveiled his plans. "We have to see the details," she said.

Austria has already announced that it would push the EU to stop Germany from implementing Dobrindt's plan.

Austrian Transportation Minister Doris Bures said she would "use all legal means" to prevent what she described as an act of "discrimination" against her country's drivers.

"If Gemany thinks it can discriminate against Austrian drivers, this will be met with my resistance," she said on ORF public radio on Monday.

Germany has imposed a toll on trucks using its autobahns and other major thoroughfares since the start of 2005.

Toll fees for car drivers have been hailed a success by many countries, but Germany is reluctant to make drivers pay. But since fixing run-down roads and bridges requires billions of euros, some want to charge visitors. (13.08.2013)