German Transport Minister Alexander Dobrindt plans to introduce a new road toll in 2016, effectively aimed at foreign drivers. The controversial law could be put to a vote next week. 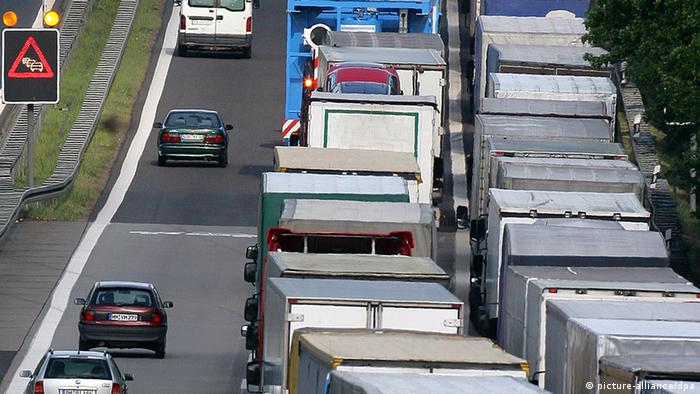 The new road toll should be introduced because it would finally grant "fairness on German roads," Transport Minister Alexander Dobrindt said on Saturday at a conference of the Bavarian Christian Social Union (CSU) in the city of Bamberg. The senior member of the sister party to Chancellor Merkel's Christian Democrats (CDU) underlined that this topic had been discussed "for 30 years" by his party.

The toll would force foreign car drivers to pay when using Germany's "Autobahns," or highways. Meanwhile, German drivers would effectively pay nothing, with the road toll being deducted from their regular motor vehicle tax. Chancellor Angela Merkel's cabinet approved the law in December 2014. It could be put to the vote on Thursday in the Bundestag.

Critics have argued that the law would discriminate against foreign motorists. In December, EU Transport Commissioner Violeta Bulc expressed doubt that the legislation complied with EU rules, insisting that foreign and German drivers needed to be "treated equally."

Hannelore Kraft, state premier of the northwestern region of North Rhine-Westphalia (NRW), also criticized the new road toll in an interview with the popular German newspaper "Bild am Sonntag".

"We in NRW are referring to it as the 'botched toll,'" Kraft told Bild. "If our European neighbors soon have to pay, then fewer of their holidaymakers will come to our tourist regions. This concerns me." Kraft also expressed serious doubts that Brussels would approve of a rule, aiming to tax non-German EU citizens while protecting Germans from extra costs.

However, CSU leader Horst Seehofer said on Saturday that the road toll would stand if challenged in court. "I am sure that the law will be passed and that it is in line with EU rules," he stated at the CSU conference in Bamberg.

In an interview with the magazine "Der Spiegel", the leader of the Green Party's parliamentary group, Toni Hofreiter, expressed hopes that German President Joachim Gauck might stop the controversial law by refusing to sign it.

Given the grand coalition's enormous majority in the Bundestag, the CSU proposal is likely to clear the lower house of parliament when the vote takes place, even if there's resistance from within the ruling coalition.

Critics of a German road toll for foreigners have lashed out against the scheme as draft legislation on it saw its first reading in the national parliament. But the minister behind it defended it vigorously. (26.02.2015)

Germany's new transport minister, Alexander Dobrindt, has said that a toll for foreign cars on highways could be implemented by 2015. He postulated an annual pass costing 100 euros, to be reimbursed for domestic drivers. (22.12.2013)