Call it the story of the little engine that couldn't. Germany's toy train maker Maerklin has been forced into receivership. Still, the company vows to keep chugging ahead. 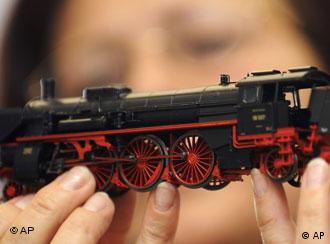 The wheels are threatening to come off at Maerklin

Maerklin has become the latest victim of banks' hesitancy about lending money amidst the global economic crisis.

The news of the bankruptcy was particularly ironic, coming as it did on Wednesday, Feb. 4 -- one day before a major toy manufacturers' trade fair opens in Nuremberg.

The company said it was left with no other option after failing to obtain a 50 million euro credit line ($64.7 million). Nonetheless, the firm, which has been in existence for 150 years, hopes it can get back on track.

"We are determined, in consultation with the insolvency administrators, to use German bankruptcy law to restructure our traditional business, which has cult status among fans, and establish it in the long term on the market," Maerklin CEO Dietmar Mundil said in a statement. 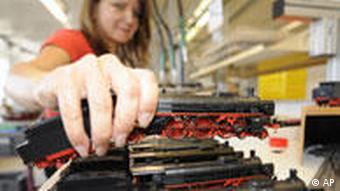 The scale replicas of a bygone era will keep rolling off the line...for now

Maerklin did some 128 million euros of business in 2008 -- slightly more than in the previous year.

But the company, which has been owned since 2006 by the Goldman Sachs and the venture capital company Knightsbridge Capital, has been unable to reduce expenditures enough to pull itself out of the red.

The company has applied for a 50 million euro loan from a local bank in southern Germany, where Maerklin is located, but that application was turned down.

The Suedwest Presse newspaper reported that the bank was unhappy about frequent top-level personnel changes in the company's owners and hefty fees paid to consultants.

Still, Maerklin has said production will continue chugging along while the details of the bankruptcy are being negotiated.

When toy manufacturers unveil the new playthings of 2010 this week at the Nuremberg Toy Fair in Germany, many will be silently praying that the industry will be recession-proof. (03.02.2009)

Owing to the financial crisis, car sales in Germany were down drastically in January compared with the same month in 2008. But amidst all the dark clouds on the horizons, automakers did see one silver lining. (04.02.2009)

As Germany's recession worsens, many of the country's business owners have jumped on the anti-free-trade bandwagon, according to a new study. (02.02.2009)