Mixing English and German into the teutonic-flavored patter known as "Denglish" still scores points with the trendy set, but in the town of Mühlhausen, it's likely to earn you stern stares of disapproval. 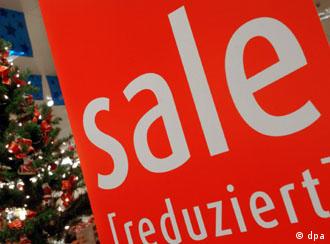 In future, retailers need to fit "Schlussverkauf" on their posters

All over Germany, it's common to hear Germans slipping a little English into their everyday lingo. You might hear Germans talk of going "shoppen" at their local "Discounter," enjoying a little "flirten" at a party for "Singles," or attending a "Meeting" with the "Management" at work.

This mish-mash of deutsch and English is referred to by Germans as "Denglish," and while many people think it's cool, the small town of Mühlhausen in Thuringia think it ought to be verboten.

At the end of October, the town became a card-carrying member of the Institute for German Language (VDS), a self-appointed watchdog intent on keeping German unsullied by outside influences.

But before the city can declare itself cleansed of Denglish, it has a lot of work to do, starting with the city's official Web site. Press spokeswoman Angelika Bergmann, whose job it is to maintain the site, admitted there is room for improvement. The "Home" button should be renamed "Startseite," for example. Bergmann is still looking for a good German alternative for the site's "Newsletter." 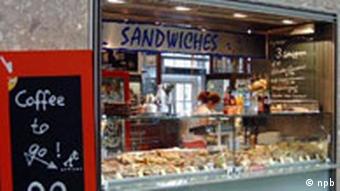 From the signs at this sandwich bar, you wouldn't know it was located in Germany

Outside city hall, officials are hoping to wean Mühlhausen residents off commonly used English words such as "city," "shuttlebus," and "recycling," in favor of their German equivalents.

Bergmann is counting on the cooperation of shopkeepers in particular, to rid the city of one of her pet peeves -- posters in shop windows that read "Sale" instead of "Schlussverkauf."

"Where there are German words for the English term, they should be used," said Bergmann, whose aim is to make communication simpler and more effective for the people of Mühlhausen.

To that end, Denglish isn't the only linguistic element that is getting an overhaul -- the brand of complicated bureaucratic German favored by civil servants will also be "translated" into German that the average person can understand.

Fast becoming Europe's lingua franca, English has invaded other national languages. The trend has some on the continent worried that languages might in the future take second place even within their countries of origin. (Dec. 1, 2004)

DW-WORLD has compiled some stories on Denglish. As one German perfume store's "English" slogan put it until recently (when it was replaced by a German one): "Come in and find out!"

After several misguided years of using bad English to woo customers, German advertisers have apparently rediscovered their own language. It may not help ailing retailers much, but limiting silly Denglish is long overdue. (Nov. 15, 2004)