People with albinism have pale skin due to a pigment disorder that barely protects the skin from the sun's radiation. In Africa, this is an acute problem. Two Germans are developing a low-cost African sun cream. 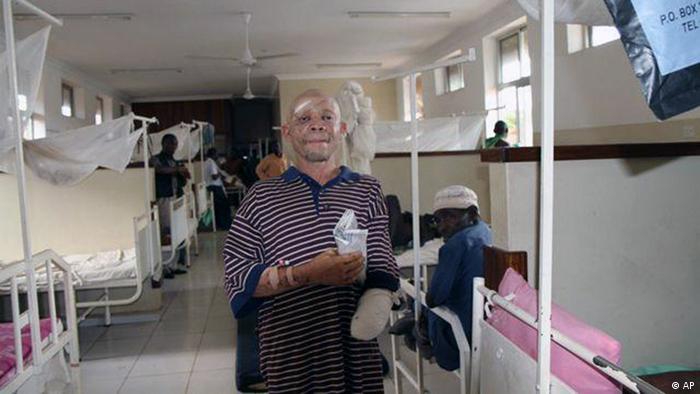 It's once again busy just before closing time in Martin Wipperman's pharmacy in Pulheim, a small town close to the German city of Cologne. Herbert Kirchesch enters the pharmacy as the last packs of pills for headache and allergies are being sold to late-comers. Kirchesch is not in the store to buy drugs; instead, he has come to discuss a project with store owner Wipperman.

They are helping albinos in Africa develop a cheap sun cream which will reduce the skin's exposure to high levels of the sun's radiation. Kirchesch is a dermatologist and works closely with a support group for people with albinism in Germany. Wipperman is a phamacist running small-scale experimantal projects.

When they heard of albinism in Africa for the first time, it occurred to both the dermatologist and the pharmacist that albinos on the continent must face great difficulties because of the high intensity of the sun's radiation there. 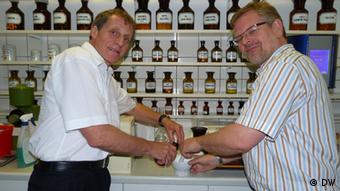 Albinism is a disorder in which the indiividual suffers from a complete or partial lack of the pigment in the skin. When exposed to sunlight, the skin of an albino does not acquire a tan. Instead, it remains light and there is a greater risk of skin cancer.

As they wanted to help, the two Germans established contacts with albinos in Kenya, where the price for a tube of suntan lotion is about $15 (12 euros). "We then thought about how we could acquire sun cream that can be assembled in Africa," says Kirchesch. Pharmacist Wipperman then began researching sun protection factors, recipes and the usability of those recipes in Africa.

In his small laboratory behind the sales counter, Martin Wipperman experiments with various chemicals. After some trials, he realizes that the solution was simple. He grabs a big bottle from a shelf. The bottle, with "Zinc Oxydat" written on it, contains zinc oxide, a white powder. He adds cooking oil and body lotion to the powder and begins mixing. "This is obviously a bit rough and not how the cosmetic industry works," Wipperman admits. "But it's better than nothing. After all, we achieve the maximum sun protection factor of 20". 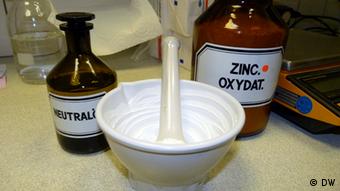 Sun cream produced by German team for albinos in Africa

A kilo of zinc oxide in Germany costs 10 euros. Mixed with cooking oil and a normal body cream, one kilo of zinc oxide can be processed into up to 20 liters of sun cream. After the test, Kirchesch and Wipperman sent a package containing zinc oxide and the recipe to Judith Muloyo in Kenya. 39-year-old Muloyo, an albino herself, is a social worker seeking to dispel widespread ignorance about albinism.

Albinos in most African countries suffer from prejudice and are often rejected by their families. In other more extreme cases, many have been killed and their bodies dismembered for ritual purposes. In Africa, some believe albinos possess magical powers.

For the German team, the target is to reduce skin diseases like cancer among African albinos. Activist Muloyo says the sun cream project has so far been very successful. She, too, has tried the product that she made with Wipperman's recipe. "The skin got smoother and it looks better now. Most people that tried it have also confirmed it," says the social worker. "Now I just need to convince more people so that the cream can be sold in the markets."

Currently, the price of Muloyo's home-made sun cream is six to seven dollars per tube. This is much too expensive for most albinos, especially as a tube only lasts a few weeks with intensive usage. "The biggest challenge in reducing the price is to find an inexpensive source of zinc oxide" says Herbert Kirchesch. It is a problem that cannot be solved from a pharmacy in Pulheim.

Germany intends to expand the program of courses to help immigrants to integrate. Chancellor Merkel pointed to successful examples of integration and said society should put more effort into working with immigrants. (03.11.2010)

During the Third Reich, Germany had a small black community, yet relatively little is known about their life in the Nazi era. Deutsche Welle takes a look at survival strategies under Hitler's oppressive regime. (10.01.2010)