German Stone Age sailor to cross seas in reed boat | Europe | News and current affairs from around the continent | DW | 04.08.2019

A German experimental archaeologist and his team plan to sail a boat made of reeds across three seas, just like ancient Egyptian merchants did thousands of years ago. Jodi Hilton reports from Beloslav, Bulgaria. 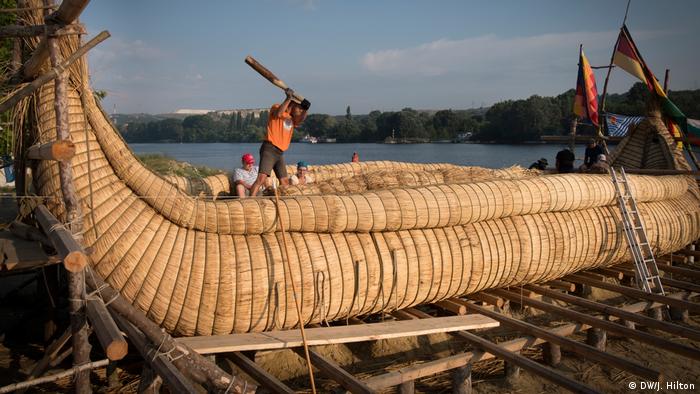 On the edge of Lake Varna in Bulgaria, an unusual looking vessel is under construction. A team of Europeans and Bolivians are racing to complete their work, binding, packing and cutting reeds under the burning Bulgarian sun.

A crescent-shaped sailboat is being constructed primarily of reeds imported from Lake Titicaca in Bolivia (and delivered in two shipping containers). The head of the team is Dominique Görlitz, a 53-year-old German experimental archaeologist leading his fourth such expedition, Abora IV. Görlitz and his team aim to sail from Bulgaria to Cyprus, crossing three seas to prove that ancient Egyptian merchants sailed north into the Black Sea and back. 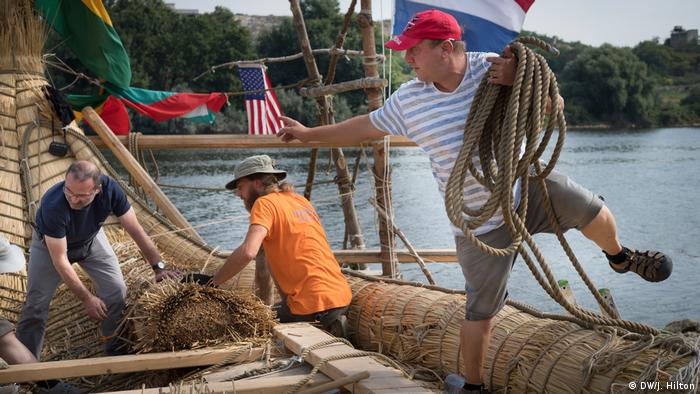 Egyptian seafarers brought iron to Egypt from the Caucuses in order to build the pyramids, says Görlitz. He was part of a group that studied iron traces in the mammoth blocks of the Great Pyramid of King Khufu, dating back to the third millennium B.C., 1,000 years earlier than the generally understood beginning of the Iron Age.

Görlitz cites this evidence to explain that iron tools had been used to lift such heavy stones, as described by the ancient Greek historian Herodotus, who wrote about the use of iron during the epoch of the pyramid construction. Görlitz's previous expeditions demonstrated the possibility of ancient reed boat travel from Sardinia to Elba in 1999, from Alexandria to Cyprus in 2002 and from New York to the Azores in 2007. He hypothesizes that prehistoric humans traveled to the New World and back, bringing tobacco and cocaine to North Africa — he has found traces of both alongside Egyptian mummies.

Rime of the ancient mariner

The team plan to sail the 14-meter (46-foot) reed boat later this month from Varna, Bulgaria, 3,000 kilometers (1,900 miles) to Cyprus, crossing through the Bosporus and the Dardanelles and into the Aegean Sea.

"This is the most stable vessel you can imagine," explains Görlitz, pointing to a predynastic drawing of a boat with leg-like structures from Egypt from which he drew inspiration.

Prehistoric vessels could navigate and even tack against the wind thousands of years ago by employing what Görlitz calls "a secret weapon": leeboards, a type of adjustable keel, bound to the hull, which can be raised or lowered 1.5 meters underwater to control and stabilize maneuvers.

The choice of Varna as a port of departure points to the existence of the Varna culture dating back to 4,300 B.C., when it was an important Black Sea trading port. Greek islanders from Lemnos traveled to Varna, bringing valuable coral-colored spondylus (thorny oyster) shells which were spread around Europe and found in archaeological sites in various parts across the continent, including Germany.

In fact, trade routes crisscrossing the Mediterranean and Black Seas played a major role in paving the way for technological and cultural achievements, because it was the highway used for the transportation of raw materials used by the advanced civilizations of the time. 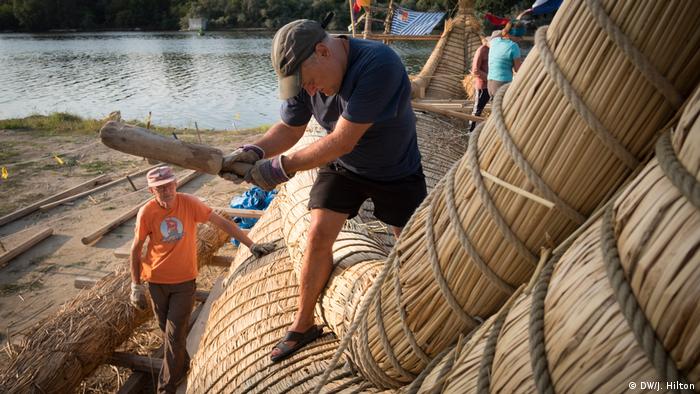 The boat's construction is being overseen by a team from Bolivia: Fermin Limachi, 50 and his son Yuri, 25, ethnic Aymara from South America and experts in the construction of totora boats, the traditional reed sailboats and canoes used on Lake Titicaca. They are part of a boat-building family. Fermin's father was part of the team that constructed Ra II, which Norwegian explorer Thor Heyerdahl famously sailed 6,100 kilometers from Morocco to Barbados in 1970.

Limachi grew up on small island on Lake Titicaca and says he started to learn his craft at the age of 7, making totora boats with his father and grandfathers. Unlike when he was a child, most of the boats currently used on Lake Titicaca are built of wood or fiberglass. "There are very few people who still know how to build totora boats," he explains. He's been working with Görlitz since 2001, helping to build seaworthy reed boats.

"This is the first time we're constructing a boat with Lake Titicaca materials in another country," says Limachi. The three previous boats were built on Lake Titicaca and transported to the departure point, he explains.

Reed boats are constructed by bundling and tying reeds into columns, which are eventually bound and shaped like a banana. Once constructed, the builders spend hours tightening the columns by striking them strategically with a baseball bat-shaped device to compress the grasses, while simultaneously further tightening the binding ropes until much of the air between is reduced, giving the boat more durability and flotation while decreasing water absorption rates.

Once the hull is formed, a 12-meter bi-pod mast is installed, with the help of a crane, which also lifts the two hand-stitched papyrus-reed cabins, which will be the crew's sleeping quarters. A ramp is used to move the vessel into Lake Varna, where trials will soon begin before heading to the open sea.

A huge, but satisfying challenge

"It's quite exhausting, hammering all day and pulling," says Mark Peels, a 42-year-old Dutch electrician and windsurfer who says he learned about Heyerdahl's expeditions as a child and dreamed of making such a trip. For Peels, the adventure will continue at sea, which he compares to ascending high mountains like K2 or Kilimanjaro. "The whole time it's hard work, but it's worth it," he said. 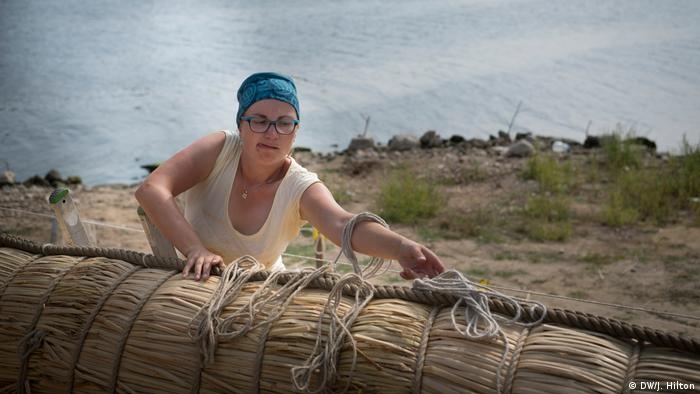 Team member Heike Vogel, a 35-year-old German from near Chemnitz, spent the better part of a day binding a rope along the side railings. She employed a V-shaped, handcrafted wooden tool used in Bolivia to make space between the reeds in order to weave the rope though the reed bundles.

Vogel began working alongside Görlitz in Egypt in 2002 and was again with the team in New York, helping to build the cabins on the main boat body which was prefabricated in Bolivia.

"Normally, I'm sitting at the computer and on the telephone with customers," says Vogel, who works for a parcel-shipping company. "This will be my first time on such a big boat at sea." She plans to sail with the crew for two weeks before she has to return home. "I don't want to go back to work."

Some scientists will go to amazing lengths to prove a theory. Botanist and archaeologist Dominique Görlitz is no exception. He's setting sail to cross the Atlantic -- against the wind -- in a reed boat. (10.07.2007)

How did Stone Age man live thousands of years ago? The Lake Dwelling Museum in Unteruhldingen, on the German shores of Lake Constance, features painstakingly reconstructed small villages towering on wooden stilts. (15.08.2016)