German shift to green energy in ′mortal danger′ from TTIP | Business | Economy and finance news from a German perspective | DW | 11.07.2016

German shift to green energy in 'mortal danger' from TTIP

As EU and US negotiators have begun a new round of talks on the TTIP free trade pact, Greenpeace has published leaked documents, saying they would show Germany's drive toward renewable energy is in 'mortal danger.' 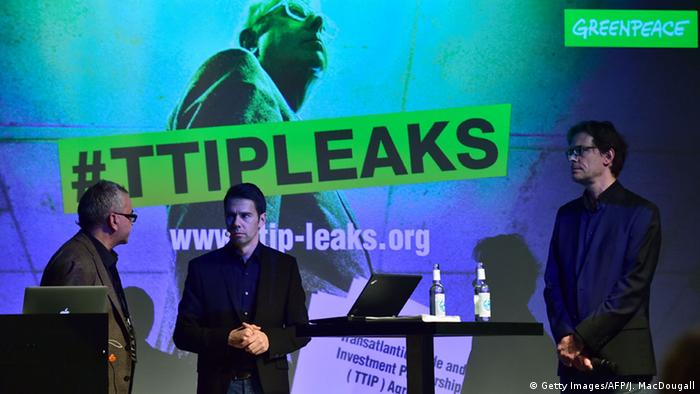 Greenpeace said on Monday that a draft EU proposal outlining the bloc's position on energy policies would categorize a number of measures taken within Germany's transition to renewables as "inhibiting free trade" between the EU and the United States.

Greenpeace said it had received leaked documents about the EU proposal which would show, for example, that current German legislation giving green energy preferential access to the national grid would be regarded as illegal under the Transatlantic Trade and Investment Partnership (TTIP).

"Should this proposal become part of the free trade pact, Germany's shift to renewable energy is in mortal danger," Greenpeace spokesman Christoph Lieven said in a statement.

Lieven also called on the German government to stop negotiations for TTIP immediately if it wants to prevent the EU Commission from undermining the bloc's climate policy.

The warning came on the same day as US and EU negotiators launched their 14th round of talks on the mammoth and controversial free trade deal in Brussels.

During this week's negotiations, the EU side is expected to present detailed proposals on the automotive, cosmetics, textiles, chemicals and engineering sectors, a senior source in Brussels told the German news agency DPA.

Speaking on condition of anonymity, the source added that US wanted to outline its plans on trade defense issues, among other things.

EU-US free trade talks began in 2013 with the aim of creating the world's largest free trade area, boasting 800 million people, and creating higher growth and more jobs through liberalized trade. But critics on both sides of the Atlantic worry the pact could water down consumer protections and make it easier for large corporations to sidestep national laws.

There is a sense of urgency in the negotiations as both sides want to submit a full draft TTIP text after the summer, with a view to concluding negotiations before US President Barack Obama leaves office in January.

On Friday Obama meet EU President Donald Tusk and EU Commission President Jean-Claude Juncker in Warsaw. "While we are mindful of the challenges, we are going to continue to pursue a Transatlantic Trade and Investment Partnership," Obama said after the talks.

Juncker reaffirmed the EU's resolve to conclude the negotiations by year end, at least "as far as the big blocks of this negotiation are concerned."