Lolita, Nabokov's story of an aging European intellectual and a nymphet, has been accepted into the literary canon. Now a new scandal has emerged: a scholar has suggested Nabokov plagiarized a German writer. 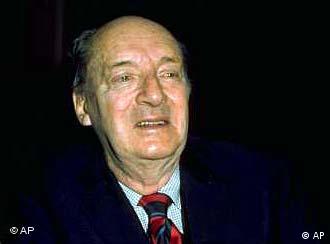 Did Vladimir Nabokov plagiarize the work of a little-known German writer?

When Vladimir Nabokov's book Lolita was first published in 1950's, it was considered scandalous. So racy was his description of the love affair between an ageing European intellectual and a young American nymphet that U.S. publishers turned it down. In 1955 Nabokov was forced to turn to French publishers to distribute the book and it was three years before U.S. publishers agreed to release the work.

More than four decades later, the initial literary scandal has subsided, and Nabokov's novel, though still generally considered controversial, has become an accepted part of the modern literary canon. But a German literary historian has once again set tongues a-wagging, stirring up another Nabokov-related literary scandal.

In the March 19th edition of the Frankfurter Allgemeine Zeitung (FAZ), a German daily, the essayist and scholar Michael Marr suggested Nabokov may have plagiarized the work of Heinz von Lichberg, a little-known German writer and journalist, whose version of Lolita was published in 1916 in a collection of essays entitled The Cursed Gioconda ("Die Verfluchte Gioconda").

Michael Marr pointed out numerous striking similarities between the work of von Lichberg and Nabokov.

"When you read it today and compare it with the (Nabokov) novel, you have a surreal sense of déjà vu," he wrote. "The accordance of the stories' plots, the perspective from which they are told, and the choice of name are amazing…unfortunately there is not a logical rule which would tell us when a certain number of coincidences stop being chance."

Marr then went on to describe the "coincidences" and give his take on whether or not they add up to pure chance, literary borrowing, or outright plagiarism. Indeed, the two stories are similar. 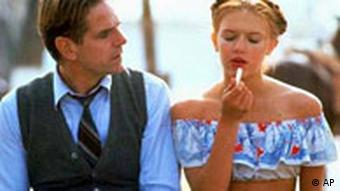 Jeremy Irons and Dominique Swain appear in a scene from the movie, "Lolita," an adaptation of the classic novel by Vladimir Nabokov.

First, and most notably, both feature a young girl named Lolita. And both follow the love affair between her and an older man. And in both cases, the girl dies.

What did Nabokov know?

Could Nabokov have known of von Lichberg's earlier work? Yes, says Marr, who points out that both lived in Berlin at the same time for more than 15 years, from 1922 to 1937. What's more, says Marr, Nabokov's German was sufficient to have read the novel -- he himself described it as "a fair knowledge of German" on a Guggenheim grant application -- and he was an avid reader of both classic and contemporary German writers. The German writer Leonhard Franks' 1929 book, "Brothers and Sisters", is thought to have served as the inspiration for Nabokov's Ada.

Representatives from Nabokov's family, however, flatly deny the charges. Dmitri Nabokov, the writer's son, said in a letter to the Nabokov critic, Dieter Zimmer, that the allegation was "either a journalistic tempest in a teacup or a deliberate mystification." Later, in a letter to the British newspaper The Guardian, he said, "Contrary to what a lot of hacks are saying, there are no similarities of name except for Lolita and the plot is one of the handful of basic plots which all literature is based."

Not the first literary copycat

If Nabokov did use the work of von Lichberg as the basis for his novel, it would not be the first time a literary great borrowed from those who came before him. The practice goes back centuries and includes some of the biggest names: William Shakespeare borrowed heavily from Arthur Brook's The Tragical History of Romeus and Juliet and John Milton's Paradise Lost has much in common with Genesis.

Whether this constitutes "plagiarism" is at the heart of the debate brewing in Germany.