The dark side of research

The Nazis murdered about 300,000 people with mental illnesses. Some of the victims' brains were handed over for research, and some are still held at German institutes. It's time to identify the victims. 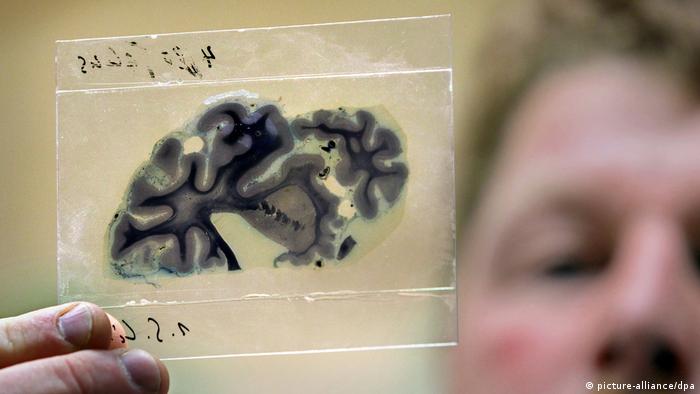 Brain slides like this one are widespread in German research labs, but some have a dark past

They are kept deep in the archive of the Max Planck Society in Munich - human brain specimens, elaborately prepared and neatly labeled.

Some of the brain specimens belong to Nazi victims. They were murdered because they were mentally ill or disabled and considered "unworthy of life," according to Hitler.

About 300,000 people including children were killed in the Nazi's so-called "euthanasia program, T4."

But the victims' brains were preserved.

"These Nazi crimes [committed during] the euthanasia program were a good opportunity for scientists to get their hands on brain tissues and examine rare neurological diseases," says Herwig Czech, a historian at the University of Vienna.

Doctors could even order the brain of a certain patient - a patient they found interesting for research.

A major part of the brains of Nazi victims, though, were preserved in formalin and kept for later. It was thought research would improve after the war.

Even until the 1970s, researchers experimented on those brain parts to find out more about the origins of diseases and conditions, including Down syndrome.

"They thought this research was ethically unproblematic," Gerrit Hohendorf, a historian at the Technical University of Munich told DW. "They thought that if these people were dead anyway at least their brains could serve medical research."

In scientific publications, Hohendorfer adds, the origin of the samples was often omitted. 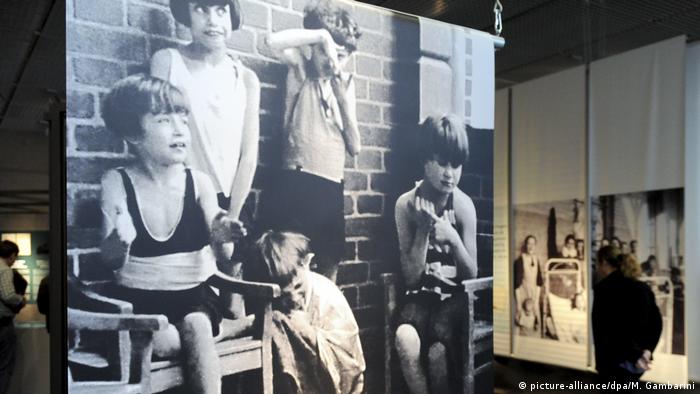 Children were also victims of the Nazi euthanasia program

The Max Planck Society is now trying to come to terms with those dark times from its past.

Starting in June, an international research team from Germany, Austria, UK and the US will work together to examine the specimens and to identify the victims, the Max Planck Society said on Tuesday (02.05.2017).

"It was simply disrespectful to continue using these human tissues for research," Herwig Czech says. "It's incompatible with today's ethical standards."

Both Czech and Hohendorf will take part in the research project, which the Max Planck Society is financing with 1.5 million euros over the next three years.

The researchers will try to identify the remains so that they can be properly buried.

They sift through books and archives at the Max Planck institutes, as well as at hospitals and psychiatric wards, and the archives of any offices associated with the Nazi euthanasia program.

They will collect all data in a new database, Czech says.

In 1990, the Max Planck Society exhumed about 100,000 human specimens at a Munich cemetery.

The specimens were suspected of having belonged to Nazi victims, including those of the euthanasia program, and those held in forced labor and concentration camps. How many brain specimens from Nazi victims are kept at the Max Planck Institute for Psychiatry in Munich?

At a memorial ceremony in 1990, the then Max Planck president, Heinz Staab, called for a "responsible self-limitation in research."

But that was not the end of the line.

In 2015, a new employee at the Max Planck Society archive in Berlin came across a shoebox-sized wooden case containing about 100 human brain slides, some of which date back to the Nazi era and possibly derive from euthanasia victims.

The specimens were once held by a German doctor called Julius Hallervorden, who was head of the Neuropathology Department at the Kaiser Wilhelm Institute for Brain Research in Nazi Germany.

The brain slides were moved the Max Planck Society in 2001 as part of a donation.

An expert inspection found more specimens at the Max Planck Institute for Psychiatry.

The research project starting in June will identify not only the owners of these newly found specimens but also of those exhumed in 1990.

Those sterilized and killed by doctors in Nazi Germany have been the focus of a moving ceremony in the German parliament. Relatives of victims told harrowing stories of how their family members were put to death. (27.01.2017)

Scientists in Austria have succeeded in growing human brain tissue. The test tube "mini brains" come from stem cells and are contributing to our understanding of human brain disorders. (13.09.2013)