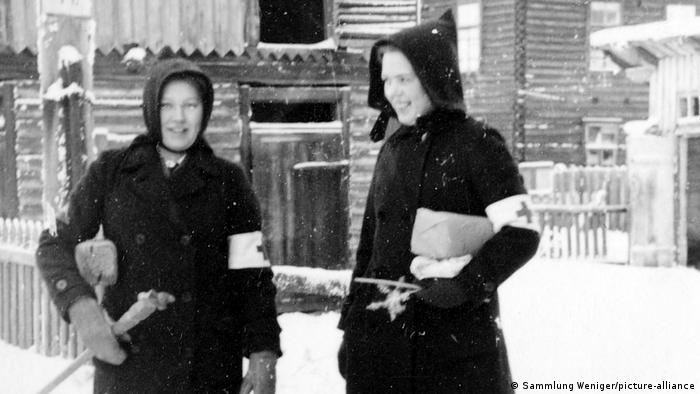 Between 1933 and 1945, the German Red Cross was closely complicit in Hitler's murderous regime, according to historians and medics on the eve of a university conference.

Ahead of online lectures to be hosted in Erlangen in northern Bavaria on Saturday, co-organizer Horst Seithe called the Red Cross' post-war German organization (DRK) — now sworn to neutrality — to officially admit its wartime guilt on January 25, when it marks 100 years since its founding in the Bavarian city of Bamberg back in 1921.

The coming days would show whether the DRK would "use this chance or let it lapse," said Seithe, a Nuremberg pediatrician and co-author of a 2001 book entitled "Das Deutsche Rote Kreuz im Dritten Reich" (The German Red Cross in the Third Reich).

Cited by Germany's Protestant EPD news agency, Seithe on Friday accused the German DRK, currently with some 3 million members, of perpetrating for decades the legend of being "a humanitarian organization in inhumane times."

From Hitler's power seizure in 1933, it adopted his leadership principle and by 1940 among the DRK upper echelons 86% were members of the Nazi party, he said.

Seithe told EPD that the DRK became implicated in euthanasia, the murder of patients, the Holocaust and annihilation warfare.

Büschel, author of a Charles Edward biography, said diaries and photo albums were evidence of Nazi pervasiveness, racism, arrogance and contempt for humanity.

But such sources, Büschel said, also testified "to despair, doubt, resistance or vehement adherence to the idea of wanting to keep people alive and help them, regardless of their origin."

In 2015, the northern Bavarian newspaper Frankenpost cited new historical findings that Hitler used Surrey-born Duke Carl Eduard of what became the House of Windsor to conduct secret diplomacy with Britain.

Germany's present-day Red Cross, comprising more than 4,500 local groups and 32 affiliated institutions and governed via 2008 German law, declares itself a neutral and humane entity that rescues people and "stands by the poor and needy, and watches over international humanitarian law — in Germany and around the world."

Over 70 years after Hitler's death, relics from his rule are still being discovered in churches and public buildings across Germany. Should they be demolished or preserved for posterity as eye witnesses dwindle?

How the Amazon became popular in the Third Reich

In the 1930s, a zoologist used funds from the Nazi regime to travel through the Brazilian Amazon. The expedition inspired a movie, a book and left behind a massive cross with a swastika in the jungle.

Norwegian penguins get vaccinated and can end isolation 1m ago