German Reactions to Powell′s Speech Mixed | News and current affairs from Germany and around the world | DW | 06.02.2003

Washington presents the Security Council with evidence that Iraq continues to secretly produce biological, chemical and nuclear weapons as well as harboring international terrorists. But can it convince skeptics? 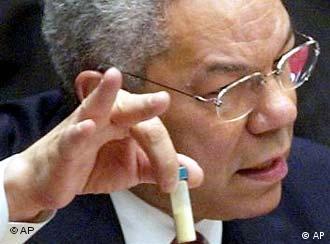 To support his country’s allegations that Iraq has failed to disarm and maintains contact with terrorist organizations, United States Secretary of State Colin Powell presented fresh evidence during a meeting of the United Nations Security Council on Wednesday. Powell used audio recordings, satellite photos and statements from Iraqi dissidents allegedly collected by intelligence officials in the U.S. and other countries to make his points.

Following Powell’s presentation, German Foreign Minister Fischer pleaded for a peaceful resolution to the Iraq conflict, calling for the inspectors to be given more time to do their work and for the inspection regime to be intensified.

Fischer, whose country now holds the Council’s rotating presidency, chaired the meeting. Both Fischer and German Chancellor Gerhard Schröder reiterated their opposition to force in interviews televised prior to the Council session.

"Germany will not participate in a war against Iraq, and that's the way it's going to be," Schröder told German public television on Tuesday night. Schröder did, however, say Germany would review the evidence brought forward by Powell. "First I'm going to look at what type of evidence this is. But it's going to be something for Mr. Blix and Mr. ElBaradei, who will assess the evidence for the Security Council and then make recommendations to the Security Council. I've always said the inspectors should and must be given the time they need."

Speaking in lock step with Schröder on Wednesday morning, Fischer said Germany is still holding out hope that a peaceful resolution can be found. "Our position is clear," he told a public television station. "We will not participate in military action. We see a good chance of achieving the aim of U.N. Resolution 1441 without resorting to violence. The inspectors need time."

A spokesman in Berlin said the the government would issue an official response to Powell’s speech on Thursday. But other major political parties in Germany already issued statements on Wednesday evening.

Meanwhile, Rühe, who heads the Foreign Affairs Committee in the German parliament, accused the German government of falling further into a defensive mode over its policy on Iraq. The CDU politician also called on the German government to come forward with its own intelligence information, which he said would "not contradict" Powell's own report.

At one point during his 75-minute long speech, Powell played what he said was a telephone exchange between an Iraqi general and a colonel in which the two men allegedly spoke of "modified vehicles" and "evacuating" facilities. "This effort to hide things from the inspectors is not one or two isolated events," Powell said, "quite the contrary."

Powell said that Saddam Hussein’s regime maintains relations to the al Qaeda network of terrorists, in particular through Abu Musab Zarqawi, who is thought to be a member of the higher ranks of the terrorist organization. Powell told the Security Council that Zarqaw has a terrorist cell that has been operating out of Iraq for over eight months.

Powell concluded by stating: "Iraq is in breach of its obligations. I believe this conclusion is irrefutable. Iraq has now placed itself in danger of the serious consequences."

Hans Blix: "War Is Not Inevitable"

On Feb. 8, Hans Blix will travel to Baghdad, where he will continue his Iraqi weapons probe. In an interview with DW-TV, the UN's chief weapons inspector says it's too early to call it a day. (Feb. 5, 2003)