Germany is facing four days of possible travel chaos as train drivers extend their strike to passenger services. The railway operator says it will take legal action against the drivers' union in a bid to end the walkout. 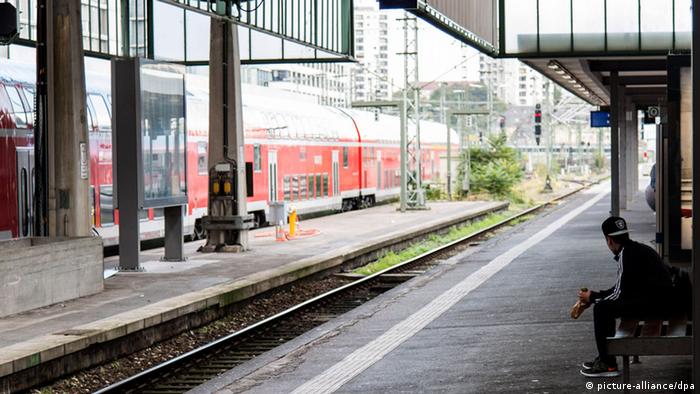 German state-owned railway operator Deutsche Bahn said on Thursday it would seek an injunction in a labor court in a bid to put an end to a drivers' strike that has crippled rail services across the country.

The company said it had decided to take legal action after the GDL drivers' union rejected its offer of mediation talks.

"We want to try everything in our power and have now reluctantly decided to take legal steps against this strike," Deutsche Bahn chief human resources officer Ulrich Weber said in the German capital, Berlin.

"However, we are very well aware that in the past, judges have mostly decided against employers," he said.

In its application for an injunction, Deutsche Bahn had mentioned the damaging effect the strike is likely to have on celebrations in Berlin for the 25th anniversary of the fall of the Berlin Wall, according to Weber. The strike would also negatively affect many holidaymakers returning home at the end of autumn holidays in the states of Lower Saxony and Bremen, he said.

The labor court in Frankfurt said it would decide on Thursday whether or not the strike will be allowed to continue.

The GDL began its unprecedented industrial action on Wednesday with a strike on freight services, extending the walkout to passenger trains on Thursday. The strike is scheduled to continue until Monday, which would make it the longest rail strike in the 20 years of Deutsche Bahn's existence.

The strike went ahead as planned after the union late on Wednesday rejected an arbitration offer by Deutsche Bahn, which has so far not given in to workers' demand for a five-percent wage hike and a shorter working week of 37 hours.

Politicians and industry groups have attacked the strike, saying it will slow down production and cause damage to the German economy.

Gasoline supply companies have also warned of transport problems; the expected rise in road traffic resulting from the strike could lead to fuel shortages in some areas as early as Sunday.

Chancellor Angela Merkel has called on Deutsche Bahn to launch a round of conciliation talks to bring the dispute to an end, after calling for the right to strike to be used "responsibly" and "with a sense of proportion."

Opinion: Strikes are an annoyance, not a big drama

Elsewhere, people wait on the platform forever, but Germans get nervous if they have to wait five minutes. Now there will be major disruptions for four days. Is that justifiable, ask Volker Wagener and Felix Steiner. (06.11.2014)