German prosecutors say they suspect an Algerian man already in police custody of being a member of the "Islamic State." The man allegedly provided information about the Balkan route to one of the Paris attackers. 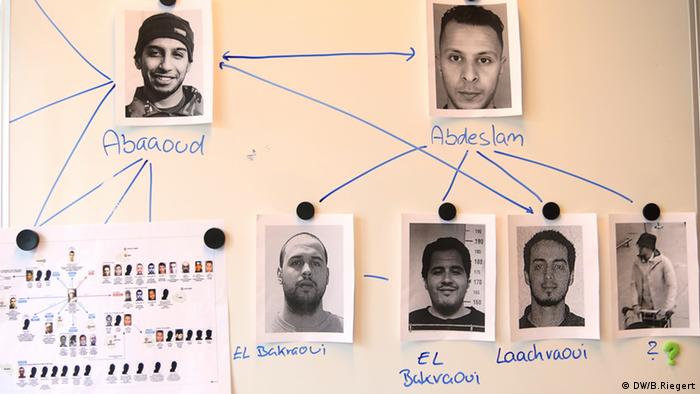 German federal prosecutors suspect Bilal C. of being a member of the so-called "Islamic State." He allegedly helped Paris terror attack figure Abdelhamid Abaaoud travel through the Balkans along with migrants last year.

A Brussels court has convicted a group of men of forming a terror organization. The 'Verviers cell' has been sentenced to between eight and 16 years in prison. (05.07.2016)

British police have arrested five people for alleged terror offenses after an investigation that followed the Paris and Brussels attacks. Suspect Mohamed Abrini is thought to have visited the English city of Birmingham. (15.04.2016)

"The accused traveled from June to August 2015 from Syria via Turkey, Greece, Serbia and Hungary to Austria," informing Abaaoud along the way, prosecutors said. From Austria, the accused went to Germany.

Investigators said Bilal C. was already in custody in Germany "on another matter."

Abaaoud, a Belgian-Moroccan, was killed in a French police raid following the Paris attacks.

The Algerian also allegedly informed Ayoub El Khazzani of trafficking and smuggling routes during his trip to western Europe. El Khazzani allegedly planned to carry out an attack with an assault weapon aboard a Paris-Amsterdam high-speed Thalys train in August 2015 before being subdued by passengers.

Bilal C. left Algeria in September 2014 to travel to Syria via Turkey, investigators said. By December 2014 he had joined IS and underwent weapons training. He has been in Germany since August 2015.

Investigators said there was no indication Bilal C. had been active with IS while in Germany.