On the 20th anniversary of racist riots in Rostock, the German president has called for a strong democracy that protects human dignity against extremism. The Rostock riots were the worst hate attacks since WWII. 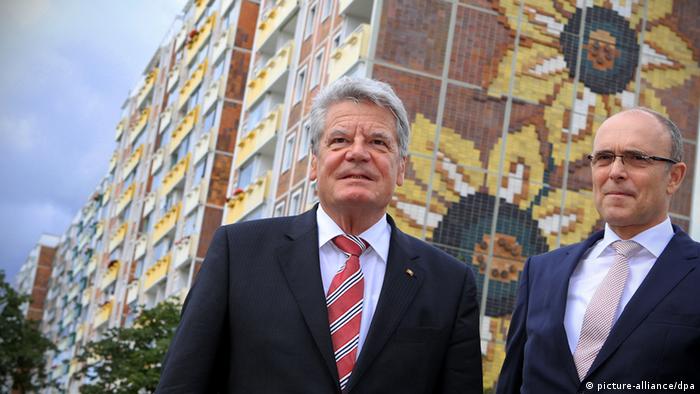 German President Joachim Gauck on Sunday marked the 20th anniversary of racist riots in his hometown of Rostock, by calling on citizens and the state to stand up to right-wing extremism.

"Democracy must be resilient and cannot allow law and order to be taken from its hands," Gauck said in the keynote speech of Sunday's memorial service.The German president added that democracy needs "brave" citizens who do not turn a blind eye, and that above all the state had to be capable of protecting dignity and human life.

Gauck went on to say that a broad front stands ready to confront right-wing extremists like those who in 1992 attacked asylum seekers in the Lichtenhagen district of Rostock, located in the northeastern German state of Mecklenburg-Western Pomerania.

"We promise you - we do not fear you," Gauck said. "Where you stand, we will stand in your way."

Why the rule of law burned down in Rostock

In 1992, the port of Rostock saw some of the worst xenophobic violence in post-war Germany, when a mob of young people attacked a building housing asylum seekers. The incident had serious consequences for the country. (22.08.2012)

Some 1,500 cyclists rallied in front the apartment building where the 1992 hate attacks took place, called the "Sunflower House," to demonstrate in support of tolerance. They planted a tree in front of the building to symbolize peace.

In August 1992, just two years after German reunification, hundreds of people threw stones and firebombs at the Sunflower House apartment building used by asylum seekers, most of them Sinti and Roma. Bystanders cheered on the assailants, yelling "foreigners out."

Local authorities did not respond decisively to the attacks, with reinforced riot police first moving in to stop the violence a day after it had started. The reinforcements from Hamburg withdrew, believing they had the pacified the area. Assailants then returned, setting a neighboring hostel on fire with at least 100 Vietnamese guest workers still inside. The Vietnamese residents were only able to make a rooftop escape at the last minute. No one was hurt in the fire.