German President Joachim Gauck has used a visit to Turkey to voice criticism of Prime Minister Recep Tayyip Erdogan’s government. Gauck is on a four-day visit to the country. 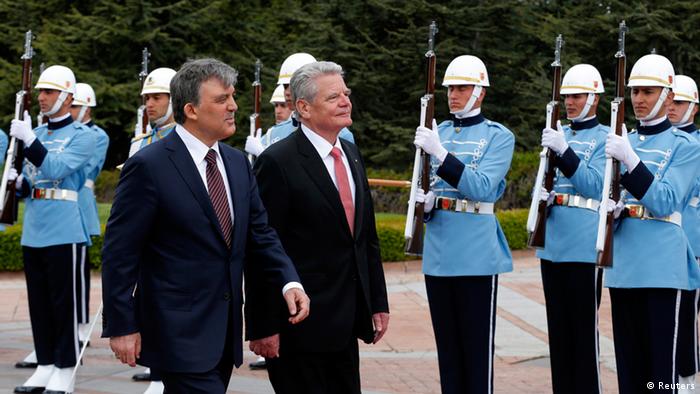 Speaking to reporters following a meeting with Turkish President Abdullah Gul (left in photo) in Ankara on Monday, Gauck (right) criticized the government for its moves to curtail the use of some websites in the country.

"Is it necessary to ban Twitter or YouTube?" the German president asked. "Does this really further democracy?"

Gul countered the criticism, saying "no country is complete."

Gauck was referring to the government's banning of both Twitter and YouTube last month, after they were used to spread audio recordings appearing to implement Prime Minister Erdogan and members of his inner circle in a corruption scandal. The country's constitutional court later overturned the ban on Twitter, ruling that it amounted to a breach of free speech.

Gauck had begun the second day of his trip to the country by visiting and laying a wreath at the mausoleum of the founder of the modern Turkish state, Mustafa Kemal Ataturk.

Shortly afterwards, Gauck and his partner, Daniela Schadt, were officially welcomed with military honors, including a 21-gun salute.

Gauck was also scheduled to hold talks with Erdogan and deliver a speech on German-Turkish relations at Ankara's Middle East Technical University.

A call to do more

On Sunday, Gauck visted the refugee camp on the outskirts of the southern city of Kahramanmaras, where about 16,000 Syrian refugees are living.

On a tour through the camp, Gauck said he had "great respect" for Turkey's assistance to the refugees.

Gauck later met with German troops stationed nearby. About 300 Bundeswehr soldiers have been in Turkey since the beginning of 2013, helping to man NATO missile defense batteries meant to protect the country from possible spillover from the conflict in neighboring Syria.

Gauck focusing on freedom in Turkey

German President Joachim Gauck will address issues such as the rule-of-law and freedom of speech during his visit to Turkey. But the trip is unlikely to attract much media attention in the country. (28.04.2014)

Turkish Prime Minister Recep Tayyip Erdogan has said his government will "go after" Twitter and other online giants for tax evasion. He also attacked the country's top court, which has sided with the Internet firms. (12.04.2014)