Zoe Wees, Revolverheld and a band singing from a bunker in Kharkiv were among the stars who joined the "Sound of Peace" rally in Berlin, raising almost €12 million for Ukraine.

Around 15,000 participants gathered at Berlin's Brandenburg gate for the "Sound of Peace" event on March 20, an anti-war campaign which raised nearly €12 million ($13 million) for humanitarian aid in Ukraine.

Ukrainian band Selo i Ludy also joined the rally virtually, singing Bon Jovi's "It's my life" from a bunker in Kharkiv.

Ukrainian singer Natalia Klitschko, the wife of Kyiv mayor and ex-professional boxer Vitali Klitschko, also sang an emotional song for her country. She and the couple's children live in Hamburg, while her husband is fighting in Ukraine with his brother, Wladimir Klitschko.

She has spoken at peace demonstrations several times since the war began, and most recently sang at a solidarity concert at the Hamburg State Opera. 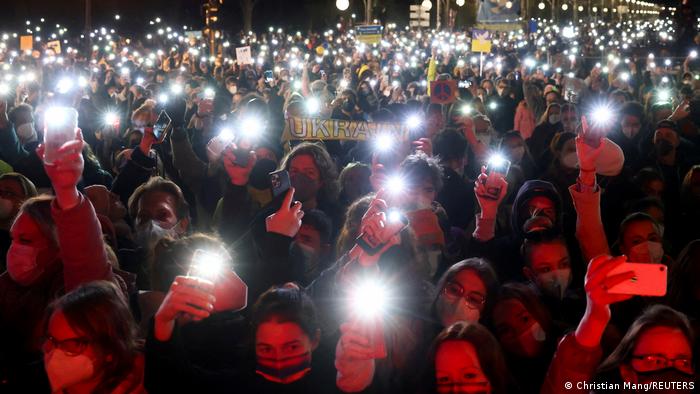 A symbol for peace and democracy

The "Sound of Peace" initiative, which describes itself as an alliance of solidarity for the culture sector, organized the rally and quickly gathered the support of well-known pop stars.

Music is in a position to unite people all over the world, and to build bridges, the alliance writes on its website.

Sound of Peace wanted to "set a strong and unmistakable symbol for peace, human rights and democracy" with the demo, while also stating that racism "must not get a place in any form, neither at the borders nor anywhere else." 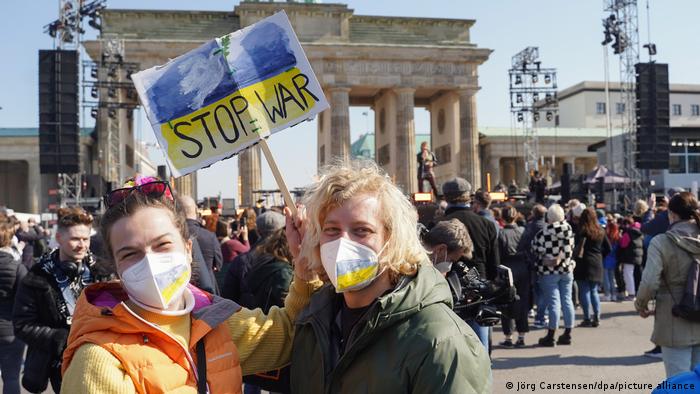 The German government also backed the event. Claudia Roth, Germany's Minister of State for Culture, told the German press agency, dpa, that she wholeheartedly supports "culture for peace — and against the aggression of Putin's regime, solidarity with Ukraine, but also with the many people in Russia, especially from the arts, culture and media, who have the courage to speak out against the war and stand up for peace." 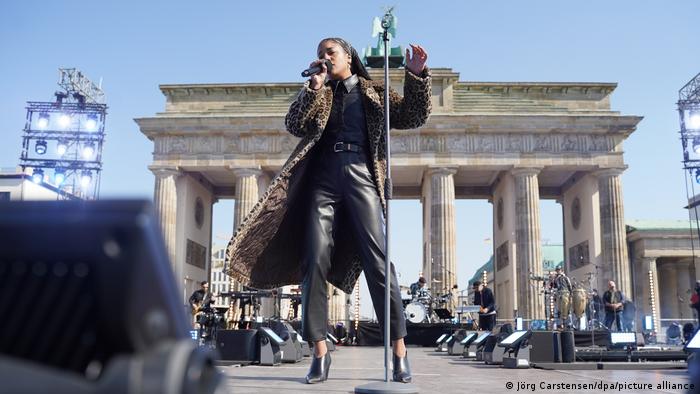 Singer Lary was among the performers at the rally

"Music can always be a voice to formulate protest, but also to create cohesion and fill hearts," Revolverheld's Johannes Strate told dpa, adding that's why it's important for music to be part of such a movement. Life hasn't been the same for a few weeks, he added — first thing in the morning, people turn to the news, frightened, to learn about whatever terrible things have happened during the night.

"That's why we didn't hesitate for a second when the 'Sound of Peace' idea came up. "

This article was originally written in German and was updated on March 21, following the event.

A War Unfolding - The Ukraine Crisis

On 24 February 2022, Russian tanks rolled into Ukraine. DW correspondents have been reporting on the war in Europe from the start - from Kyiv, Lviv, Odesa, the Polish-Ukrainian border and many other locations.

The Brandenburg Gate - History of a Symbol

More than just a landmark in Berlin, the Brandenburg Gate is a national symbol. Like no other building, it stands for Germany’s division and reunification.

From the Eurovision Song Contest to Disney and the Cannes Film Festival, the cultural sphere is reacting to the invasion of Ukraine. Russian artists critical of their government are also canceling performances.