German politician dismisses gays and lesbians as unfit for parenting | Germany| News and in-depth reporting from Berlin and beyond | DW | 21.12.2010

German politician dismisses gays and lesbians as unfit for parenting 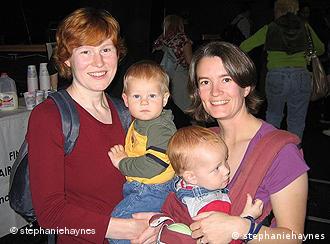 Kauder believes that these children must be disadvantaged

The head of the parliamentary group of the ruling Christian Democrats, Volker Kauder, has caused a small storm over his view that homosexual couples should not have the right to have a child.

He told Monday's Berliner Zeitung newspaper, "the welfare of the child must be the first consideration. It's not so much an issue of whether the adults want to live as a happy family. I don't believe that children want to grow up in a homosexual partnership."

Uta Kehr, spokeswoman for the Association of Lesbians and Gays in Germany, said that Kauder was encouraging prejudices against homosexual parents who care for children. But worse still was the fact that he was humiliating homosexual parents in the eyes of their children.

"How will the 15-year-old son of a lesbian couple feel, for example, if he reads such things in the paper?" she said.

Her position was backed up by leaders of the Green party, who also pointed out that the German ministry for family affairs had recently published a study showing children who lived in so-called "rainbow" families felt just as well-looked-after and were just as successful as children of the same age in conventional families. 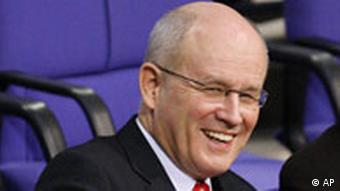 Volker Kauder has met with sharp criticism for his remarks

Kauder made his comment in remarks on pre-implantation genetic diagnosis (PGD), a procedure which allows genetic control of artificially inseminated embryos before they are placed in the mother's womb. The German parliament is to have a free vote on proposals to allow highly restricted access to PGD in cases where there are good grounds to fear that the unborn child could suffer from a serious genetic disease.

Kauder argued in the interview that "PGD opens the door to the temptation to select and manipulate life." But, he said, there was no "right to a child."

Chancellor Merkel's CDU party has voted to ban pre-implantation genetic diagnosis, which could detect serious illnesses in embryos. The party also wants to introduce stricter rules for foreigners who refuse to integrate. (16.11.2010)

Conservative politicians across Germany have lashed out at Justice Minister Brigitte Zypries' repeated demand that laws be changed to give homosexual couples the right to adopt children. (24.07.2009)